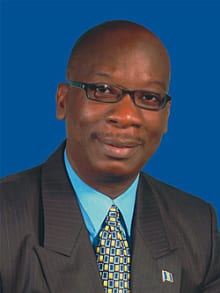 The Honourable Ronald Dacosta Jones, J.P. M.P., became a Member of Parliament for the Constituency of Christ Church East Central in January 2008 and that same year assumed the portfolio as Minister of Education and Human Resource Development.

He was re-assigned that ministry again on February 28 following the success of the Democratic Labour Party in the February 21, 2013 General Elections, but this time, with the addition of Science, Technology and Innovation. He was born on November 23rd, 1957 at Wilcox in the Parish of Christ Church.

The Hon. Ronald D. Jones received his primary education at St. Bartholomew Boys’ School. Subsequently, he attended the Washington High School where he obtained his secondary education. He also pursued studies at the Barbados Community College, before he entered the University of the West Indies, Cave Hill and was awarded a Bachelor’s degree in History and Sociology. Mr. Jones also attained a Masters Degree in Educational Management and Administration from the University of London, England and a certificate in teacher training from Erdiston Teachers’ Training College in Barbados.

In the 1970s and early 1980s the Hon. Ronald Jones was a leader of the Barbados Youth Council and the Commonwealth Caribbean Youth Workers Association of Barbados. He has also worked with the National Summer Camps Committee, the St. Bartholomew’s Boys’ Old Scholars Association and Youth Group and the Cultural Group-Thirty Three as One. The Hon. Ronald Jones became a Justice of the Peace in 1991.