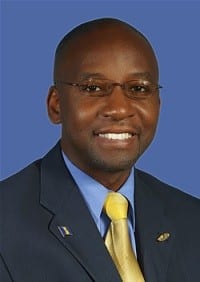 The Honourable Stephen Lashley, M.P., Attorney-at-law, was sworn in as Minister of Youth, Family and Sports on Wednesday, March 10, 2010.

Responsibility for Culture was added to his portfolio, when on Thursday, September 30, 2010, he was sworn in as Minister of Family, Culture, Sports & Youth. On February 28, 2013, he was appointed Minister of Culture, Sports and Youth. Born in Gall Hill, St. John, on January 6, 1962, he received his primary education at the St. John’s Mixed School, before proceeding to Presentation College and the Lodge School.

He has a Bachelor of Science degree in Public Administration and Law and a Bachelor of Laws degree, both from the Cave Hill Campus of the University of the West Indies. Mr. Lashley worked as a journalist from 1981 when he was a Sub-Editor at the Barbados Advocate newspaper.

From there, he moved to the Caribbean Broadcasting Corporation, where he worked as a radio and television News Reporter. He was also employed from 1982 to 1988 at Barbados Rediffusion Services Limited and the Voice of Barbados, where he honed his skills and emerged as a seasoned journalist, with a focus on investigative journalism.

In 1988, he joined the Barbados Government Information Service and worked as an Information Officer for the next eight years, performing the role of Public Relations Officer to the Ministries of Education; Health; and the Attorney-General & Home Affairs.

Opting to advance his career in a new field, he completed his legal training at the Hugh Wooding Law School in Trinidad and Tobago and was admitted to the Bar there, as well as the local Bar in 1995. In 1996 he worked as in-house counsel for the accounting firm of KPMG, and later for Cable & Wireless, where he worked as Legal Advisor with lead responsibility for Risk Management, Internet and E-commerce, Contract and Consumer Protection matters.

In 2008, he entered elective politics by contesting and winning a seat in the House of Assembly representing the Christ Church West Central constituency. Between 2008 and 2010, he served as Chairman of Committees in Parliament. Before his appointment as a Government Minister, he practised in his own law chambers – Denaz Law Chambers – where he focused on Corporate Law, Employment Law, E-commerce, Telecommunications Law, Intellectual Property Law, Wills and Estates and Civil Litigation.

Mr. Lashley is married to Deborah Lashley, a Graduate Teacher, and they are the parents of two girls.