The Pride Of Barbados 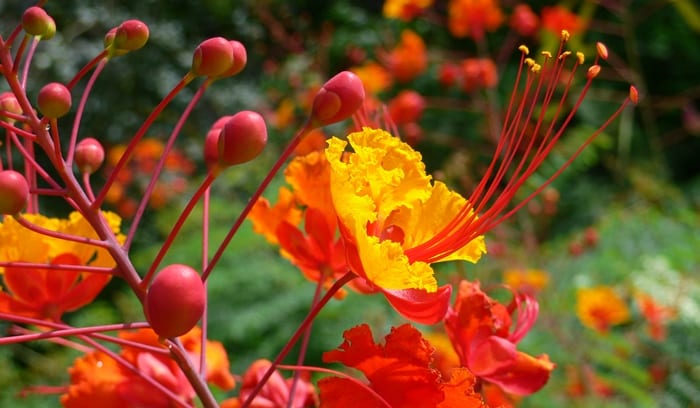 The Pride of Barbados flower radiates wherever it is in bloom, with its sunset colours lighting up its surroundings.

As a national symbol of Barbados, it can be seen across the Barbadian landscape in the fields and hills that we call our very own.  It is also embedded in the Coat of Arms as a symbol of its importance.

The Cosmopolitan Shrub is another name which Mr. Jones said was used to describe the Pride of Barbados flower, meaning it is always around. “It blooms almost throughout the year,” he said, adding that this allowed it to provide a source of nectar for pollinating agents like bees, bats, and moths, so as to facilitate pollination.

However, the national flower is also known as the Dwarf Poinciane; Red Bird of Paradise; Krere-Krere; Tabachin and Tabaquin. Its scientific name however is “Caesalpinia Pulcherrima L”. The Dendrologist explained that the latter part of the flower’s scientific name refers to its pretty petals.

Mr. Jones pointed out that the Pride of Barbados flower was a member of the legume (pod) family, and could also be found throughout the Caribbean and other tropical regions. It usually grows between 10 and 15 feet in height.

He added that there are 70 known varieties of the flower worldwide, with some bearing red, orange, yellow or pink flowers. Of the 70 varieties, six are found in Barbados, with the most common of these being the fiery red, often referred to as the Red Bird of Paradise, and a yellow “sunset” colour, known as the Yellow Bird of Paradise.

Mr. Jones said the red variety was first seen on the island in 1657, and is characterised by a yellow margin along the crinkled edge of the flower’s petal, and is recognised as Barbados’ national flower.

However, there is more to the Pride of Barbados flower than its beauty. The leaves are used by residents in Suriname to treat kidney stones, malaria fever and bronchitis. They are also used to relieve constipation.

As part of its contribution to Barbados’ 50th Anniversary of Independence, the National Conservation Commission is donating two of these flowers to each school on the island.