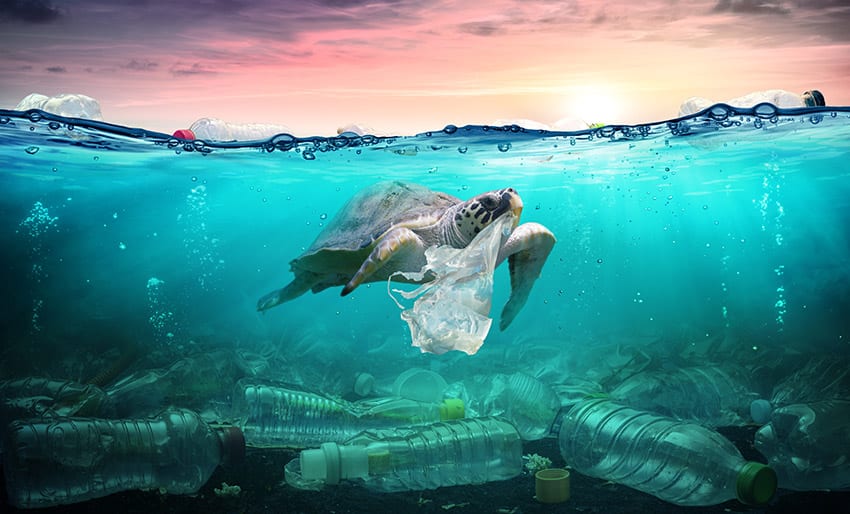 Barbados imported over 100 million individual plastic bags in 2017 –  that is enough plastic to wrap around this island 368 times.

Globally, recent studies estimate the cost of plastics at US$2.5 trillion per year, with between eight and 12 million tonnes making its way into the world’s oceans.

Now, Barbados has joined the fight to ban all petro-based single use plastics, with a ban on its importation on April 1, and its usage from Monday, July 1.

And, with a range of alternative products already on the market, some are questioning the difference in costs between those and the traditional products. But what is the real cost of making the switch?

[x_pullquote cite=”Marine Biologist and Sustainability Consultant, Nikola Simpson” type=”left”]”Barbados imported over 100 million individual plastic bags in 2017 –  that is enough plastic to wrap around this island 368 times.”[/x_pullquote]

Minister of Maritime Affairs and the Blue Economy, Kirk Humphrey, stated: “The cost is not necessarily between the cost of a polystyrene cup and the cost of a biodegradable cup; the cost really is the cost to clean up Barbados, protect our coral, save our fish and save our own health.

“At the end of the day, it has been found that there are a lot of microplastics in the things that we consume.  Those are the real costs…. So, when you are looking at the true cost of what we are trying to protect, you could see this is a massive saving for Barbados.”

He added that while some may see the ban as an inconvenience, it was one that was necessary, especially as there was evidence showing the damage straws could cause to the environment.

Mr. Humphrey made reference to pictures of turtles with straws sticking out of their noses and other forms of marine life dying after ingesting plastic, which they mistook for food.

“At the end of the day these things don’t go away,” the minister stated. 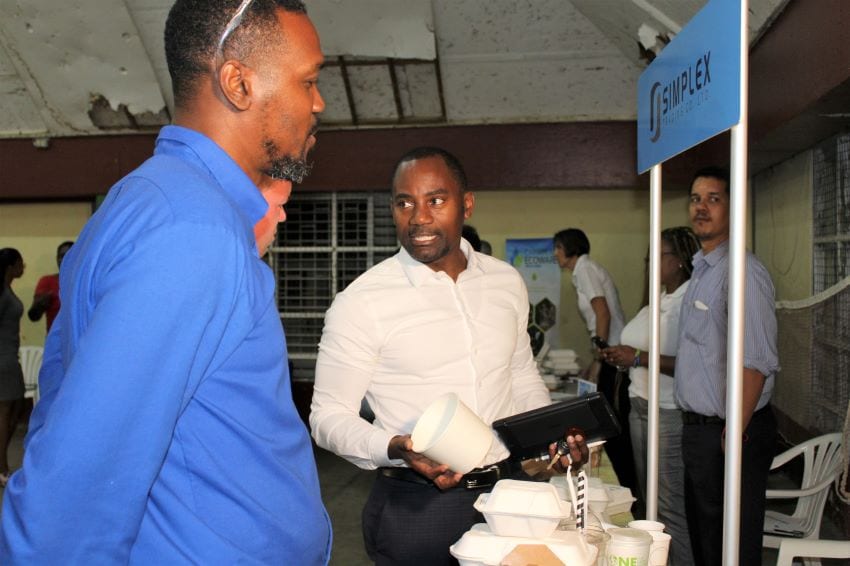 Minister of Maritime Affairs and the Blue Economy, Kirk Humphrey, viewing some of the alternative containers at a display booth at the town hall meeting on April 17. (A.Husbands/BGIS)

This view was supported by Marine Biologist and Sustainability Consultant, Nikola Simpson, who also identified health, the environment and by extension, the economy, as the real costs that needed to be considered.

She explained that there are seven types of plastic, many of which contain toxins that have been linked to diseases such as cancer, and can contribute to a low sperm count in men.

[x_pullquote cite=”Marine Biologist and Sustainability Consultant, Nikola Simpson” type=”left”] “It is estimated that by 2050 there will be more plastic than fish by weight in our oceans.  Chances are, if you are eating fish you are eating plastic.”[/x_pullquote]

“It is estimated that by 2050 there will be more plastic than fish by weight in our oceans.  Chances are, if you are eating fish you are eating plastic,” she pointed out.

The marine biologist said that when plastic enters the ocean, species such as sea turtles and fish mistake it for their natural diet, such as jelly fish.  So, a clear plastic bag floating in the sea is easily mistaken for a jelly fish.

“So, they eat the plastic and it can only go down; it can’t come back out,” she said, noting that this inevitably had an impact on marine life, such as sea turtles, whales and fish, which often choked to death from ingesting plastic.

Ms. Simpson also pointed out that persons who ate fish could potentially be eating plastic, which was also eaten by fish.  “I have done work dissecting fish, and have seen bits of plastic in the fish gut,” she said. 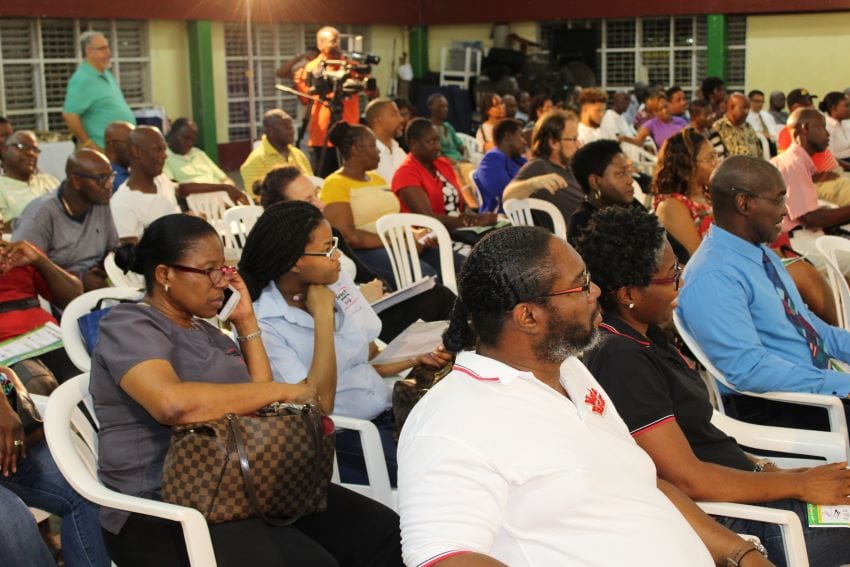 A section of the audience at the town hall meeting on the ban of petro-based single-use plastics at the Graydon Sealy Secondary School last Wednesday. (A.Husbands/BGIS)

However, Styrofoam containers, another banned item in Barbados, have also been flagged as causing health concerns.

“Styrofoam or polystyrene is a plastic that also contains many chemicals and toxins, which have potential negative impacts on our health. When you warm up your food, or heat your food in a microwave in Styrofoam, the bad chemicals leach into your food,” she said.

She added that while the average person would not pick up a piece of Styrofoam and bite it, that was technically what they were doing when they heated their food in such containers.

Meanwhile, Ms. Simpson also noted that the environmental impacts of plastic were wide-ranging as there was no such term as “thrown away” when it came to plastics.

“Plastics don’t break down; they break up into smaller pieces.  The smaller the pieces, the more places they can go.  Plastics are pretty sturdy and that is what makes them so successful.  So, they are cheap, convenient and sturdy, and that’s also a problem,” the marine biologist said, noting that the environmental and health impacts were connected.

She added that most of the plastics thrown into the landfill are packed on top of each other, and usually leach into the soil.  Ms. Simpson said that eventually some of the chemicals in the plastics break into smaller pieces, and enter the soil, and then enter our groundwater.