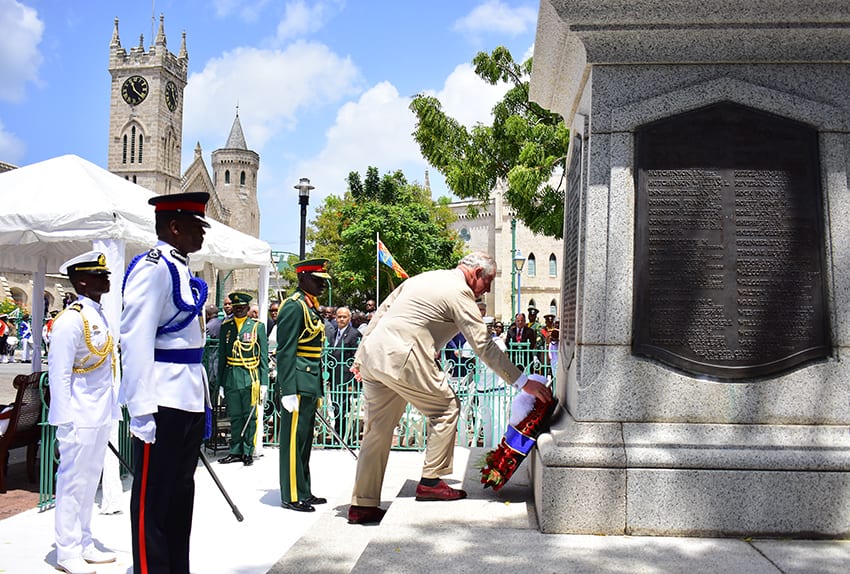 His Royal Highness, The Prince of Wales, laying a wreath at the Cenotaph in National Heroes Square today on his official visit to Barbados. (C.Pitt/BGIS)

Barbadians of all ages took up every vantage point in The City, including the Chamberlain Bridge, to get a glimpse of the Prince, who was dapperly attired in a khaki suit and highly polished brown shoes.

Their Royal Highnesses arrived in National Heroes Square about 11:15 a.m., where they were greeted by Prime Minister Mia Amor Mottley.

Prince Charles mounted the dais, where the National Anthem of Barbados was played, and there was a 21-gun salute.

During brief remarks after the presentation, Prince Charles said that on February 27, 1981, Her Majesty the Queen gave her approval for the Ceremonial White Ensign of the Barbados Coast Guard.

“It therefore gives me nothing but the greatest pleasure and pride that some 38 years later, I am able to present these ceremonial Colours to you on Her Majesty’s behalf, and to do so, in this Historic Heroes Square.

“As you march off the square today with your new Colours, I have every confidence that the men and women of the Barbados Coast Guard and the Cadet Corps, will carry these Colours with pride.  If I may say so, that pride will be wholly justified by the commitment, professionalism and dedication to service, both locally and regionally, with which you have served your country, and the Queen, over these past four decades,” he stated.

Prince Charles told the soldiers that he was certain that they would continue to serve with distinction and inspire all those who came after them.

At the end of the military parade and wreath-laying ceremony, Their Royal Highnesses and Prime Minister Mottley spent a few minutes interacting with the excited crowd.

Just after noon, Prince Charles and Prime Minister Mottley went into the Ermy Bourne Committee Room in the Parliament Building, for a courtesy call, where they exchanged gifts before they started their discussions.

Click here to view the gallery of today’s official visit of Their Royal Highnesses.