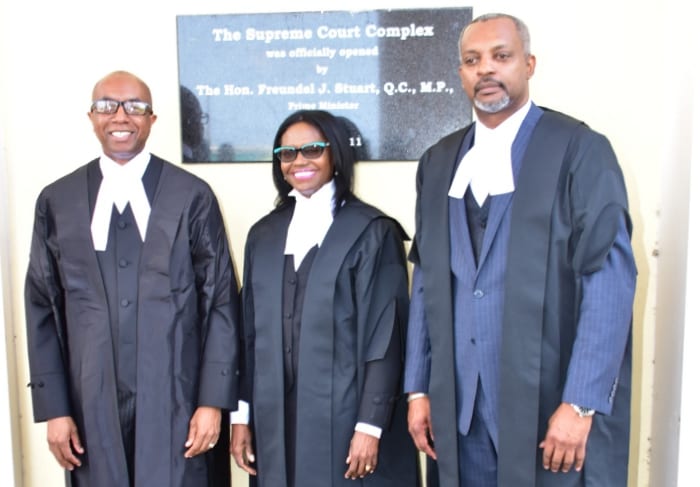 History was created today when Chief Justice, Sir Marston Gibson, admitted simultaneously the first husband and wife to the Inner Bar of the Supreme Court.

They shared their happy moment with Acting Judge, Alrick Scott, who was also admitted to the Inner Bar ahead of Friday’s official ceremony, which will see 18 persons, including Minister of Transport and Works, Michael Lashley, being called.

Attorney General, Adriel Brathwaite, QC, moved for the admission of the couple to be elevated to the level of Queen’s Counsel. Mr. Brathwaite noted that Mrs. Cooke-Alleyne was called to the Bar in 1991, after completing studies at the University of the West Indies, Cave Hill Campus, and the Hugh Wooding Law School.

From there, he said, she entered private practice, specialising in conveyances before joining the Solicitor General’s Chambers as a Crown Counsel. She later moved on to become a Senior Crown Counsel before becoming a Magistrate in 1998, a post which she held for 12 years. “Mrs. Cooke-Alleyne has never had a decision reversed by the Court of Appeal on any civil matters,” the Attorney General noted.

He stressed that she was known for her interest in children and was actively involved in a programme run by the Criminal Justice Research and Planning Unit for students transitioning from primary to secondary school. “She is very well respected among her peers….and is a very talented young lady,” the Attorney General said.

Similarly, he noted that Mr. Alleyne was known for his work in Commercial Law throughout Barbados and the Organisation of Eastern Caribbean States. “He is seen as an outstanding attorney-at-law and has one of the largest litigation practices in Barbados,” Mr. Brathwaite noted, adding Mr. Alleyne was also actively involved in the recently concluded Clico matter. 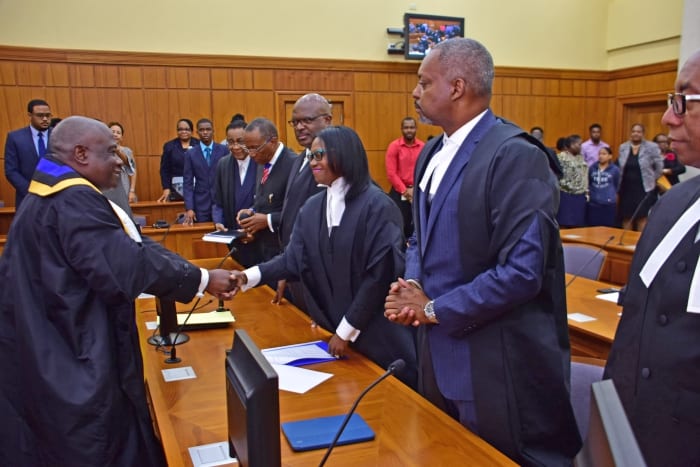 Meanwhile, Queen’s Counsel, Sir Richard Cheltenham, moved for the admission of Mr. Scott, describing him as having the characteristics which junior lawyers ought to emulate.

Sir Richard described the new Queen’s Counsel as a man of “unfailing good manners” and one who never lost his cool. In addition, he said that Mr. Scott also possessed a curious and disciplined mind, but always referred to the literature for clarity rather than guessing the answer to legal matters.

Meanwhile, Sir Marston wished the new Queen’s Counsels the best in their new journey and urged them to hold fast to their undertaking to be mentors to junior attorneys. “There is not a single one of us who has reached to the level of Queen’s Counsel or the Judiciary who was not mentored by a senior attorney,” he pointed out.

In reply, the new Queen’s Counsels thanked their families and friends for standing by them throughout the journey over the years and for the sacrifices they would have had to endure.