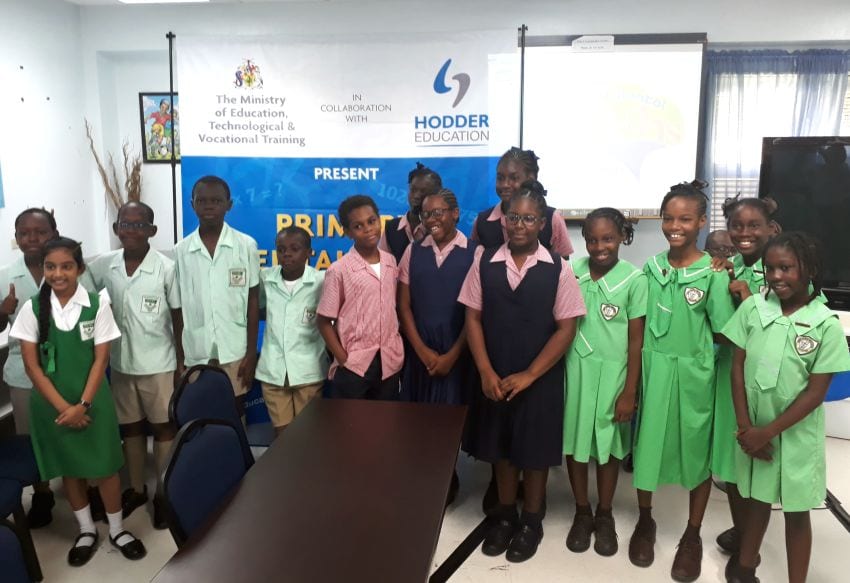 Some of the participating schools in yesterday’s semi-finals of the Primary Schools Mental Maths Competition held at the Ministry of Education, Technological and Vocational Training. (M.Rollock/BGIS)

Charles F. Broome Primary, Al-Falah School and Christ Church Girls’ School have made it through to the finals of the Primary Schools Mental Maths competition.

They beat out six other schools after keenly contested semifinals yesterday at the Ministry of Education, Technological and Vocational Training.

The competition, which targets Class Four pupils, was implemented in 2017 after the Education Officer with responsibility for Mathematics, Wendy Griffith, realized there was a need for a forum to showcase students’ problem-solving skills and mental Maths abilities.

“As I moved around in schools, I noticed that not enough work was being done in the area of mental Maths and I just wanted to stimulate greater interest in our schools. Last year, we had 16 schools that participated, this year we have 26. There are some new schools on board and out of the 26 we have five private schools. Competition has been great; the students have been improving in each round. We had two preliminary sessions and students who won those advanced to the quarterfinals and then the winners went on to the semifinals,” she explained.

The competition, which is part of Education month activities, is expected to benefit students by enhancing their concentration levels and listening skills; improving the speed and accuracy with which students solve problems; sharpening their memories; and improving Mathematics scores in examinations through fluency in recalling facts and using mental Maths strategies.

While Ms. Griffith was pleased with students’ problem-solving skills in this year’s competition, she said there was need for improvement when it came to the topic of Measurement – time, capacity and linear measurement. She noted that this was an area that the Ministry would have to focus on.

The Education Officer said that at the end of the competition, it was hoped that teachers would teach mental Maths not only to Class Four students but throughout their schools. She said she had also encouraged teachers to stage similar competitions within their institutions.

The finals of the Primary Schools Mental Maths competition will be held at the Hugh Springer Auditorium, Solidarity House, Harmony Hall, St. Michael on Tuesday, October 30, at 10:00 a.m.