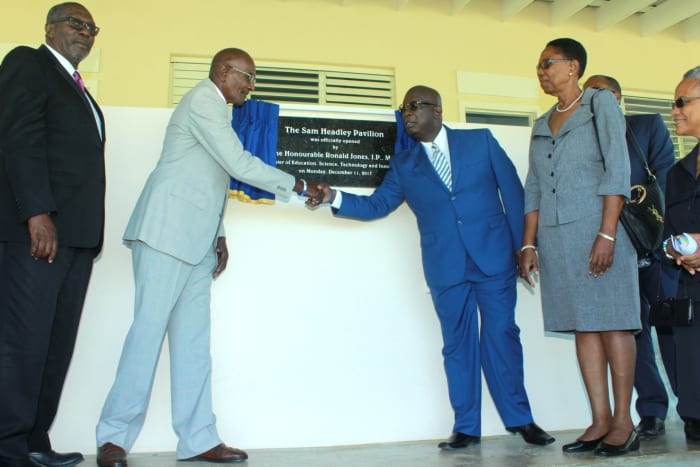 The Lodge School, at Society, St. John, can boast of having the most modern auditorium and pavilion throughout the entire school system.

Minister of Education, Science, Technology and Innovation, Ronald Jones, officially named the modern buildings during a ceremony on Monday, after three former students, turned teachers, who contributed significantly to the development of the almost 280-year-old institution.

The auditorium is now called the Estwick and Glasgow Auditorium, after Owen Estwick, and the late Earl Glasgow. The Sam Headley Pavilion carries the name of Major Sam Headley. The buildings were part of phase three of refurbishments carried out at the school, which had a price tag of $40 million and took about five years to complete.

Mr. Jones said he was pleased with the quality of work that went into the buildings, which were designed by Tony Brooks Architects Ltd, and constructed by Innotech Services Ltd. He added that he was especially satisfied with the choice of honourees.

“They have unconsciously touched the lives of numerous persons associated with The Lodge School and beyond with distinction and humility. These esteemed gentlemen have given outstanding service to Barbados in different but essential fields of endeavour…. The foundation for their lives of service to their country was laid here at The Lodge School. It was here that they developed characters that elevated them to leadership positions in their chosen careers,” the Education Minister asserted.

Mr. Glasgow was touted as “a brilliant” classical scholar and teacher, outstanding athlete, diplomat and a gentleman who was loved by his students. He passed away earlier this year.

Mr. Estwick has had a long and illustrious career as a cricket administrator. He is credited with the development of many systems used in local cricket. Many Barbadians and West Indian cricketers have benefited from his “astute” cricketing administrative knowledge, Mr. Jones said.

Mr. Headley was described as “a humble individual” who fought through many challenges, including becoming the first black Head Boy at the school in the 1940s – a decision which was not readily accepted by many of his white peers. 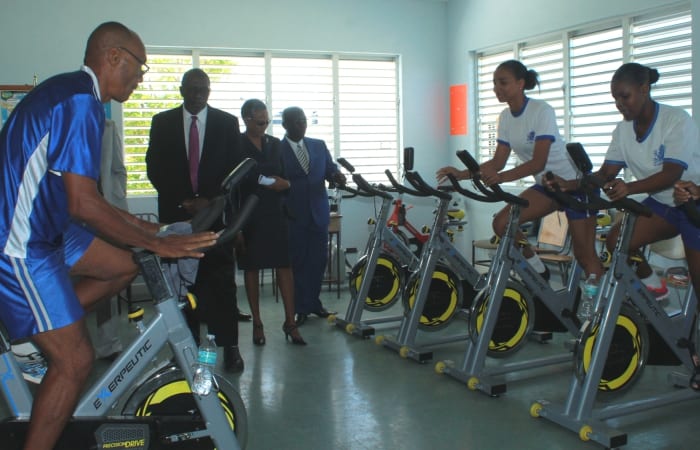 The Minister encouraged current students to learn from the sterling examples set by the three stalwarts. He also urged them to treat the new buildings with the respect that they commanded.

“This school has now become the envy of many schools and organisations and you should be proud and appreciate the environment in which you now work and study.  I, therefore, implore you students to make the best use of this campus while you are here; a facility that is conducive to study and work.

“You, too, can walk these hallowed halls, adopting the attributes of Messrs Estwick, Glasgow and Headley; fine gentlemen whose contributions have positively impacted this school, Barbados, the Caribbean and beyond,” he said.

The Sam Headley Pavilion features state-of-the-art equipment, while the Estwick and Glasgow Auditorium has a 1,000 seating capacity, two music classrooms, two changing rooms and a sound room. It also has a spacious basement which Principal, Winston Dowrich, said would eventually house the school’s gym. He added that the auditorium was available for rental for events and the management of the school had already received a number of enquiries from members of the public.