Time For Diplomatic Presence In Africa 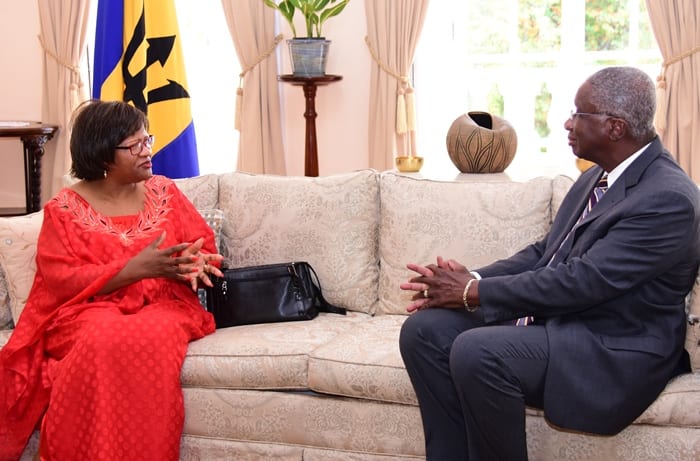 Prime Minister Freundel Stuart and newly-appointed South African High Commissioner to Barbados, X.N. Ngwevela have agreed that the time has come for Barbados to have a visible presence on the African Continent.

During a courtesy call with the High Commissioner recently, Prime Minister Stuart submitted that such a presence would make it easier for the two territories to work together.

He noted similar interests, including a shared concern for global sustainability and the green economy, and highlighted the potential in areas such as trade, investment and tourism.

Mr. Stuart said that there had been some discussion in the past about Barbados sharing facilities on the Continent with Jamaica and Trinidad and Tobago, but since the changes in government in those countries the discussions would need to be restarted.

The Prime Minister indicated that Barbados was also interested in discussing with South Africa the establishment of a number of agreements in areas such as double taxation, air services, and cultural and technical cooperation.

The South African diplomat promised to follow up on all matters related to the agreements and welcomed the proposal for a Barbados diplomatic presence in South Africa.

She stressed the importance of establishing linkages, noting that the absence of direct air transport between the Continent and the Caribbean needed to be addressed.

Once air transport was in place, Ms. Ngwevela said, there would be many more opportunities for cultural exchanges in areas such as the arts, fashion and film. She also expressed an interest in spearheading linkages between business people in Barbados and South Africa, citing the potential for trade and investment.

The High Commissioner added that she was looking forward to attending the CARICOM Heads of Government Summit, scheduled for July, and to exploring the possibility of a trade agreement between the Caribbean and Africa.