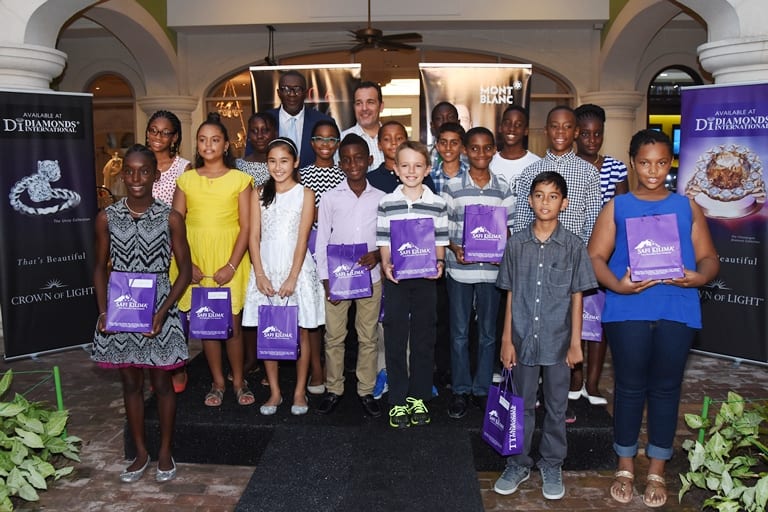 Remember the sacrifices that led to your academic achievements and write your future.

The Acting Minister told the students: “Diamonds International is giving you the writing instrument of choice… and this is a significant gift to you. I hope that you could appreciate the sacrifice on the part of your parents, teachers, Diamonds International and the sacrifice on the part of your other relatives. And, I hope that as time goes by, you will appreciate how significant this gift is.”

Referring to an excerpt in Austin ‘Tom’ Clarke’s book Growing Up Stupid Under The Union Jack, Mr. Husbands highlighted how ‘Tom’, at a young age, took to using a pen to write letters to his aunt, never knowing that one day he would be an “acclaimed author and writer of many, many books”.

“He took his pen in hand, the Esther Brook pen, the fountain pen, the Mont Blanc that you are going to use to write the future, to write good things into the future of this country and into the world,” declared the former educator.

However, he warned that this could not be attained if they ignored and forgot the sacrifices made that allowed them to receive the gift of a Mont Blanc pen, one of the leading writing instruments in the world.

Managing Director of Diamonds International, Jacob Hassid, in his congratulatory remarks, told the top students they had done “amazingly” and he reminded those gathered that Barbados’ educational system was rated highly in the region and internationally.

“That gives you even more of a distinction for your children to be the Top 20 in such a place,” he said to parents while noting that Diamonds International was making the presentation as a show of appreciation for their children’s achievement.

Pointing out that it was also about showing support for education, Mr. Hassid called it an investment in the future. He told the top students: “You are the future…. You are the people that in the very near future are going to lead this country and help take it forward.”

Echoing similar sentiments as the Acting Minister, he acknowledged Mont Blanc as the leading brand in fine writing instruments.

“I hope that you are going to use that pen to write many, many examinations… and that in the years to come, when you have your own business or become an important part of any organisation, you can write many important things with that pen and, just for fun, you are going to look at that and note your wonderful achievement,” the businessman said.