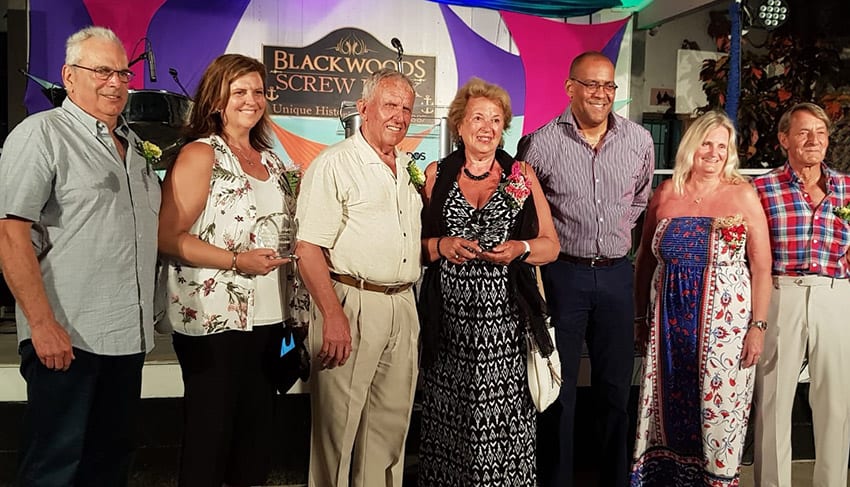 Tourism Minister, Kerrie Symmonds (third from right), poses with loyal visitors (from left to right) Roy and Angela Eyjolfson; Bert and Sharon Tenbrintie; and Malcolm and Dorothy Taylor, at the recent reception at the Blackwoods Screw Docks. (S.Pile/BGIS)

The vast stretch of beach front property from the Garrison Savannah to Blackwood Screw Dock in Bridgetown presents Barbados with an abundance of opportunities for tourism development.

This is according to Minister of Tourism and International Transport, Kerrie Symmonds, who made this observation during his speech at the final Loyal Visitor Cocktail Reception for the 2018-2019 tourist season, held recently at Blackwoods Screw Docks.

He said several international hoteliers and hotel developers were invited to a Tourism Investment Conference on island last week, and shared that they were shown potential investment opportunities on the coast and immediate environs.

“If you think about it, from the Garrison Savannah all the way to where we are now, Barbados has an abundance of opportunity which is untapped and has remained underutilized, unexplored, undeveloped from the time I was a little boy learning to swim on that beach out there.

Pointing out that tourism is the main driver of the Barbadian economy, Minister Symmonds lamented that for the last 25 years there had been approximately 6,500 hotel rooms on the island.   He, therefore, noted that it was critical that the right investment climate be created.

“This sector is supposed to be the sector that drives the Barbadian economy.  We should be seeing a greater degree of growth in the hotel room stock, in particular, and I know there has been the upsurge in the shared accommodation, the Airbnb, Flipkey and Home Away, but we have to make sure that the big player, the hotel accommodation sector, continues to demonstrate its capacity to drive Barbados’ tourism in the way it has historically done,” Mr. Symmonds said.

The Tourism Minister further stressed that investment is a critical component to Barbados’ economic recovery.

“An investment is a critical component of this trajectory of recovery, and for tourism, part of the challenge we have is that the investment that we need, and that we rely upon and that we must have is not only going to be sought or found within the local economy, because we just simply do not have the cash flow within the local economy, so we have to make it a climate that is attractive to foreign investment,” he stated.