Record Number Of Players For Tourney 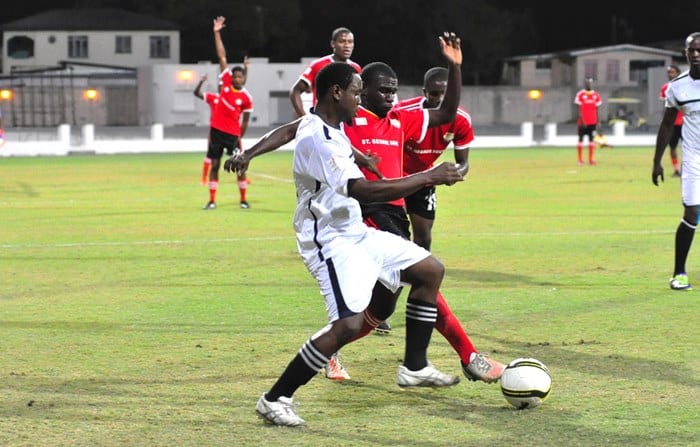 The 2016 edition of the David Thompson Memorial Constituency Council Football Classic (DTMCCFC) has ended, and has reportedly attracted the largest number of participants in its history.

Minister of Social Care, Constituency Empowerment and Community Development, Steve Blackett, disclosed this information last weekend, while speaking at the finals of the DTMCCFC tournament, held at the Kensington Oval.

“This year, the tournament has attracted far more youth players than any previous tournament,” he disclosed, adding, “each team consisted of between five and seven players under the age of 20 years, and saw in excess of 250 goals being scored from the seventy-four games played so far”.

The Minister explained that the tournament, which was launched in 2011, serves as a mechanism for achieving social mobility and instilling discipline in the country’s youth through the development of football.

“Its aim is to simultaneously facilitate cohesiveness and empower communities across all sectors of our society.  I stand here to say unreservedly, that this year’s tournament once again, has met its objectives,” he added.

Mr. Blackett lauded the coaches, managers and players of the participating constituency teams, as well as sports committees and the council members, for their commitment, sacrifice and dedication.

“The tournament would not have been possible without the hard work, behind the scenes, of the staff of the Department of Constituency Empowerment, and the Constituency Councils.  Therefore, all involved in the hosting of the DTMCCFC are being lauded tonight for making this the outstanding event that it has become,” he remarked.

The Social Care Minister also gave the teams and the players from the 30 constituency councils special recognition for their hard work and accomplishments throughout the tournament. “In sport and competition, everyone has a chance.  Each one has an opportunity to make the spotlight.  We look forward to seeing you next year and to an even better tournament,” he stated.