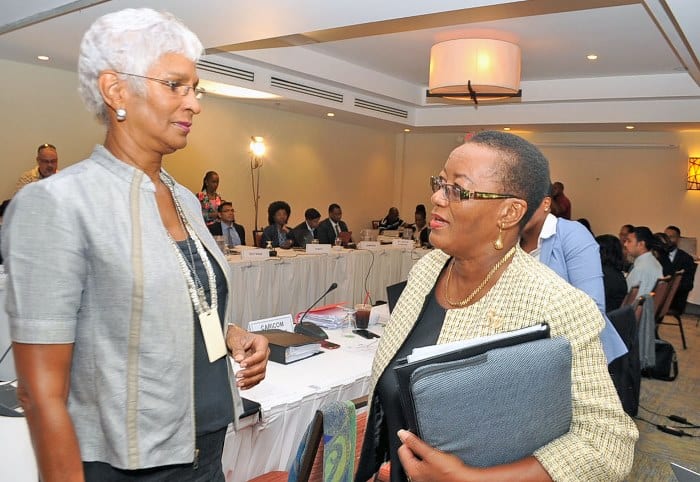 “Timely” is how the September 7-9 regional workshop on the Trade and Services Agreement (TiSA) Negotiations and the Negative List Approach to Services and Investment Liberalisation has been described by this island’s Minister of Foreign Affairs and Foreign Trade, Senator Maxine McClean.

Addressing the workshop’s official opening, today, at the Courtyard by Marriott, Hastings, Christ Church, Senator McClean said it came at a time when the Region and individual countries had to come to grips with the new economic realities in international trade.

Referring to the global financial and economic crisis and its consequences on nations, she noted that the United Nations Publications of 2010 entitled: International Trade After the Economic Crisis, Challenges and New Opportunities had identified several consequences.

These included severe contraction of the volume of world trade that went against the grain of export-led development strategies and a shift to protectionist strategies such as the use of trade policy instruments to protect domestic markets.

The Minister said, however, that on the positive side it stated that “the financial and economic crisis has changed the landscape of economic policy and presents one of the rare occasions when a new direction can be taken”.

These developments, she added, required the region to have the capacity to engage in efficient and effective negotiations in order to conclude trade agreements in our best interest, aspects of the three-day training programme, she said which not only focused on the context of negotiation but the substance of such negotiations.

“Such willingness to mobilise resources to assist CARIOM to dissect, reflect upon and resolve difficult problems facing the region must be applauded. Not to be overlooked is the valuable contribution of our hemispheric partners, Chile and Mexico who through their representatives here today demonstrate how cooperation and knowledge sharing can be used to help in overcoming limitations in human and financial resources. I believe that CARICOM’s own experiences will be brought to the fore in the exchanges over the next few days in a way that will be of mutual benefit,” said Senator McClean.

The island’s Foreign Trade Minister also took note of a concern expressed by Director General, of the CARICOM Secretariat’s Office of Trade Negotiations (OTN), Ambassador Gail Mathurin about the involvement of the private sector.

The CARICOM official had earlier regretted not having a wider cross section of the region’s private sector present and had encouraged member states to continue involving their private sector representatives in similar capacity building activities at the national level noting that “this would go a long way to revitalising and expanding the regional consultative mechanism which is an essential part of trade policy formulation”.

Minister McClean, in her response, said: “I will say, however, that the private sector must recognise the importance of these exercises and use their initiative to be represented. “It is something that is critical to the success of the sector or the various elements of the sector.

“I would also want to flag, as I mention the private sector, that as we talk about negotiations we have to incorporate in our discussions the need to balance, what I consider to be substantial business opportunities arising in new areas such as environmental goods and green technologies…

“Barbados and all CARICOM countries are engaged in a mission and a duty to improve and enhance the lives of all our peoples and this is a task that is increasingly confronted with challenges as we know originate from elsewhere… the global financial and economic crisis is testimony to that and therefore as we engage we also recognise that contextually these threats must also be accommodated.”

The regional participants also heard that in the context of CARICOM they must be in a position to demonstrate capacity and focus on succession planning as they build a cadre and a network of persons capable of effecting negotiations.