Barbados’ emergency forces will grapple with staged situations dealing with the threats of transnational organised crime, terrorism and natural hazards when Exercise Tradewinds 2017 takes place across the country from June 6 to 12.

Under the theme: Seamless States Partnership for a Secure Region, the length and breadth of the island will be tested during Phase One of the regional exercise.

The plans for Exercise Tradewinds 2017 were rolled out during a media launch at the Hodgson Hall, St. Ann’s Fort today.

“It [Exercise Tradewinds] is designed to improve cooperation and interoperability of partner nations in responding to the broad spectrum of Caribbean security threats,” Major Lovell explained.

As a result, he said, Tradewinds 2017 would focus on issues such as the scourge of illegal drugs, illegal arms and human trafficking as Barbados seeks to enhance its capabilities to counter such threats.

“It will also seek to develop new techniques and procedures to combat unfamiliar threats to Barbados such as the use of Improvised Explosive Devices, threats to key government infrastructure and kidnapping to name a few,” the Co-Director pointed out. 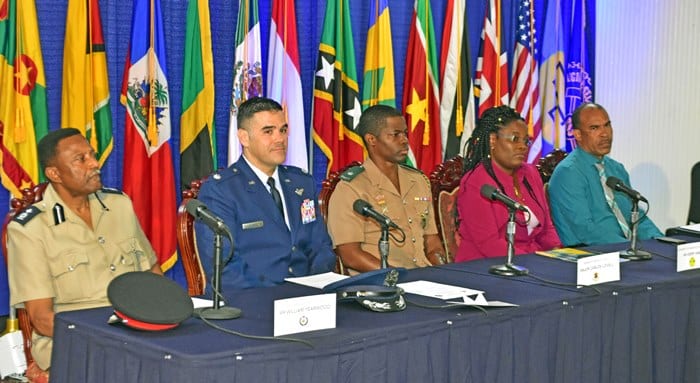 However, he noted that Barbados was seeking to implement an innovative and more efficient approach for this year’s exercise. That approach, Major Lovell said, includes pre-mission training at the strategic, operational and tactical levels; and the ability to combat one common threat in two separate member states with the CARICOM Task Force seamlessly deploying from one member state to another to execute operations.

Furthermore, Major Lovell stated that a realistic scenario based on real world threats would be the conduit through which participants would attempt to achieve the training objectives.

Without divulging details of the exercise, the Co-Director said the scenario would require responses from the exercise participants on land, in the air and at sea, with emphasis on interagency cooperation.

Second Host Nation Co-Director, Kerry Hinds, noted that under this year’s event, Barbados would also be exercising various components of the National Emergency Management Plan (NEMP) to give operatives in the system the ability to respond to the various scenarios in the field.

“These scenarios will be played out in various communities across the island,” she said. Ms. Hinds, also Director of the Department of Emergency Management, said four broad objectives for the humanitarian assistance and disaster response of Exercise Tradewinds were identified.

Those, she said, include the testing of Barbados’ NEMP in response to sudden impact hazards; enhancing local inter-agency coordination between entities with responsibility for emergency response and support; providing a means for emergency management personnel to practise and improve their skills to sudden impact hazards and promote further cooperation, coordination and response in disaster management.

“It is essential that our country continues to strengthen its preparedness for response and as such build the necessary capacity to effectively manage emergency and disasters,” Ms. Hinds stated. 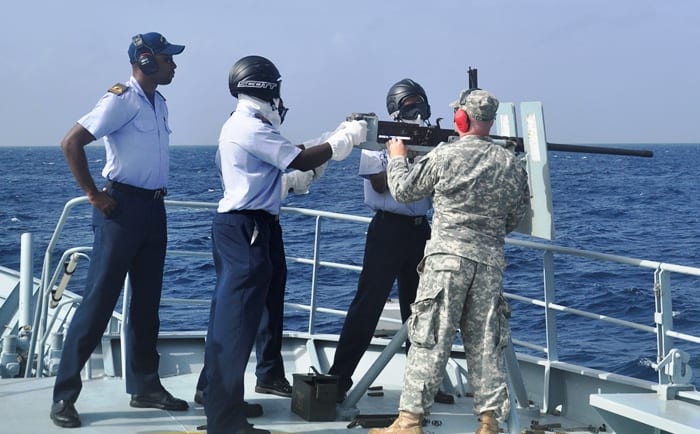 Meanwhile, Director of Training at the Regional Security System (RSS), Retired Captain Brian Roberts, reminded those present that the security environment was going through a state of constant flux.

“States today are mired by transregional and transnational threats and challenges like… insurgencies, public disorder, illegal drugs and terrorism. Furthermore, they are confronted with challenges related to environmental degradation, mass migration, refugees, epidemics and disasters,” he said.

Captain Roberts stressed therefore that participation in exercises such as Tradewinds allowed players to practise their interoperability, coordination and cooperation in order to enhance their efficiency and effectiveness as a unified response mechanism.

Approximately 2,500 persons including those from the military, emergency response forces and the general public are expected to participate in Exercise Tradewinds 2017.

This will include personnel from 21 different countries, including 120 from the (RSS), CARICOM, Canada, France, the United Kingdom and the Kingdom of the Netherlands, are expected to take part.

Exercise Tradewinds is the largest regional multiagency, multinational security and disaster management exercise held in the Caribbean in partnership with the United States of America.

This year’s Exercise is being co-hosted by the governments of Barbados and Trinidad and Tobago and sponsored by the US Southern Command.

Exercise Tradewinds will conclude with Phase Two in Trinidad and Tobago on Saturday, June 17.