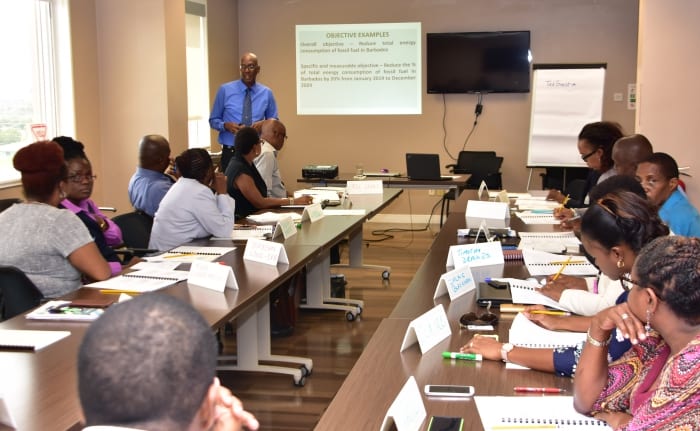 Approximately 25 public servants are currently receiving much needed assistance in the area of proposal writing for climate finance.

The two-day workshop, which is being hosted by the Economic Affairs Division, in collaboration with the Training Administration Division (TAD) and Barbados’ National Climate Finance Adviser-Commonwealth Climate Finance Access Hub, started today.

According to Senior Economist (Ag.) in the Economic Affairs Division, Kelly Hunte, the training session, which is being held at TAD, will greatly assist in strengthening the capacity of officers in various Government departments to write climate finance proposals in an effort to access available funds.

Underscoring the importance of the training, Mrs. Hunte stated: “Many Small Island Developing States, such as Barbados, experience challenges in accessing development assistance. This workshop is just one step in the necessary skills in various Government Departments to assist them in developing stronger proposals, which should improve Barbados’ approval rate.”

During today’s session, there was a presentation on the Caribbean Development Bank’s Role in Climate Finance and as a Regional Implementing Entity for the Green Climate Fund and Adaptation Fund. Participants will also be introduced to the Green Climate Fund Simplified Approval Process and get an opportunity to prepare a proposal.

It is believed that US$40 to US$175 billion per year is currently flowing from developed to developing countries for climate change related initiatives. Commonwealth-funded National Climate Finance Adviser to Barbados, Winston Bennett, is on record as saying that it was necessary to access some of the billions of dollars available for loans and grant funds.

“The investment needs far exceed the pledges, but we must, however, utilise the available funds,” Mr. Bennett stressed.