Transport Board Driver Hailed As A Hero 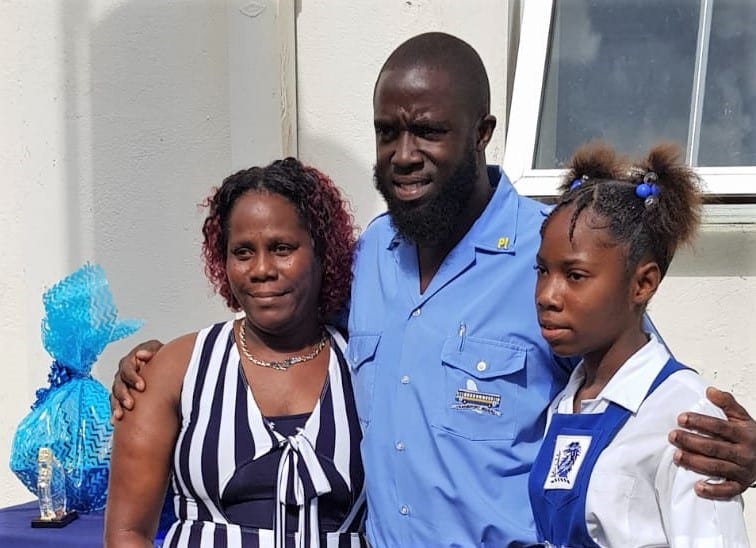 Transport Board bus driver and hero, Dale Hall poses with Allison Ross and her daughter Allisha Downes during an appreciation ceremony at the Lodge School this morning. (M.Rollock/BGIS)

Before Tuesday, April 30, 2019, Allison Ross and Transport Board Bus Driver, Dale Hall, were complete strangers. Now, they are family.

Mr. Hall’s automatic inclusion into the Ross family was as a result of his heroic actions just over a week ago when he was driving The Lodge School bus to Society, St. John, via Oistins, Christ Church.

One of the students travelling on the bus, Allisha Downes, who is the last of Ms. Ross’ three children, suffered an asthma attack.  After being alerted to the crisis that was unfolding on BM 238, Mr. Hall jumped into action.  He stopped the bus; took one look at Allisha, a second form student, and knew he had to act quickly.

“Somebody said ‘bus man this little girl like she ain’t breathing’. At that same time, I saw the medical centre ahead so I pulled the bus on the shoulder, got up and asked [the passengers] on the bus if anybody had any inhalers. They said ‘no’.  Her eyes didn’t look right, so I told her to jump on my back,” he recalled.

Mr. Hall, a former soldier with the Barbados Defence Force, piggy-backed Allisha across the road as quickly as he could to the Randal Phillips Polyclinic in Oistins, where she received medical attention.  He credited the skills he acquired as a soldier for his actions in that moment of crisis.

Satisfied that she was in capable hands, he got back on the bus and continued his route to The Lodge School, never once mentioning to anyone there what had transpired, but his heroic act did not go unnoticed.  His good deed was posted to social media by a well-meaning stranger who saw what he did, and the rest, as they say, is history.

“You have gained my love, my friendship…you will always be a part of me now and my family tree and I want to say thank you from the bottom of my heart.  I am so ever grateful for the opportunity to meet you,” said an emotional Ms. Ross, who met her daughter’s “guardian angel” for the first time at the appreciation ceremony held this morning at The Lodge School. 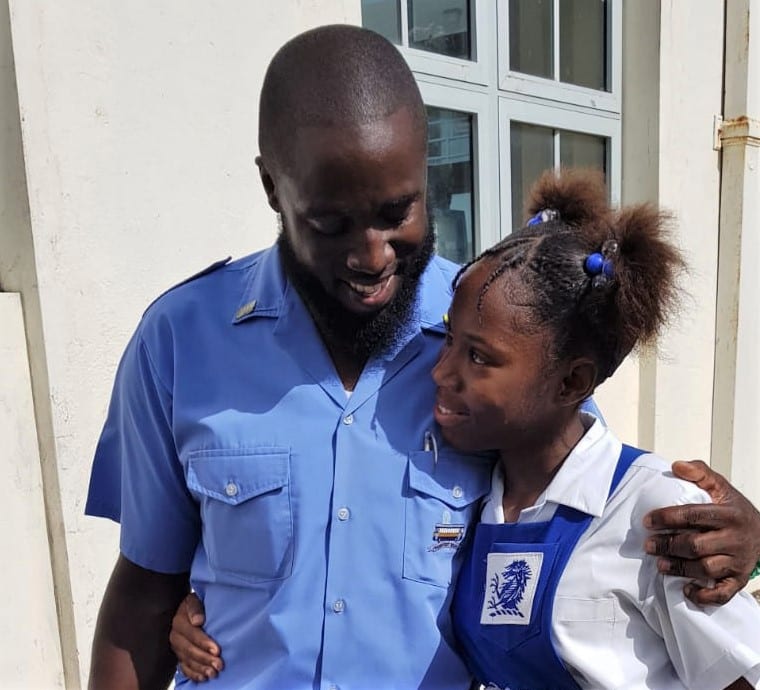 Allisha Downes, who suffered an asthma attack on April 30th, 2019 aboard Mr. Hall’s bus, thanks him for saving her life. (M. Rollock/BGIS)

She said they were running late the morning of the incident, and Allisha, in the rush to catch the school bus, forgot to put her asthma inhaler in her school bag.

Principal Winston Dowrich thanked the bus driver, who has been with the Transport Board for nearly 13 years, for his “life-saving assistance”.

“I am guessing that driving a bus with as many as 60 or 70 school children cannot be an easy task – that factor makes Mr. Hall’s actions stand out even more.  We decided …that, at the very least, the school would in the first instance write a letter to Mr. Hall conveying our heartfelt gratitude for his good deed, and make sure that his employers were also made aware of his actions.  We also decided that we would invite him to the school and present him with a small token of our appreciation…

So, Mr. Hall on behalf of the Board of Management, teaching and non-teaching staff and the students of The Lodge School, I want to thank you for the invaluable, and I dare say, life-saving assistance that you rendered to one of our Lodge School family members Allisha Downes of form 2.3,” the principal stated.

Mr. Hall was not only showered with praise but also with many gifts and trophies. One of those gifts included a three-month course in Occupational Health and Safety, compliments of the UWI’s Open Campus.

He also received a dinner for two from Accra Beach Resort and a gift from Courts Barbados, among others.  The school’s Student Council also presented him with a token of appreciation. 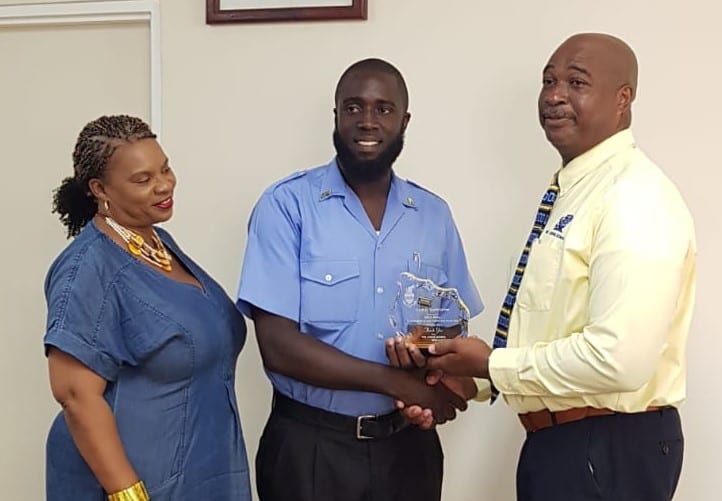 Principal of the Lodge School, Winston Dowrich, presenting a token of appreciate to bus driver and hero, Dale Hall, while the Transport Board’s Marketing and Corporate Communications manager, Lynda Holder, looks on. (M.Rollock/BGIS)

This was not the first time the driver had helped a student in distress. He has assisted many persons along his route during his time with the Transport Board, and was voted Bim’s Best Bus Driver in 2017 in The Nation Newspaper’s Unsung Heroes initiative.

Mr. Hall said he hoped others would do the same, if confronted with similar situations.

“I have two children as well, and if it was one of my children, I would want somebody to help them. By listening and seeing a lot of parents over the years losing their children… it isn’t an easy feeling to lose a child, so I had to do what I had to do.  So, thank God I was in the right place at the right time to save her life so she could be here today…,” he pointed out.

A shy and soft-spoken Allisha thanked and credited the bus driver for saving her life.

“When I got into the bus everything was fine until I got to Oistins.  It didn’t feel that bad at first, but suddenly it started to hurt more… [the bus driver] took me into the doctor, and I got in there in the nick of time because I felt as if I couldn’t do it anymore.  I was on my last breath.  He actually saved my life,” she said.