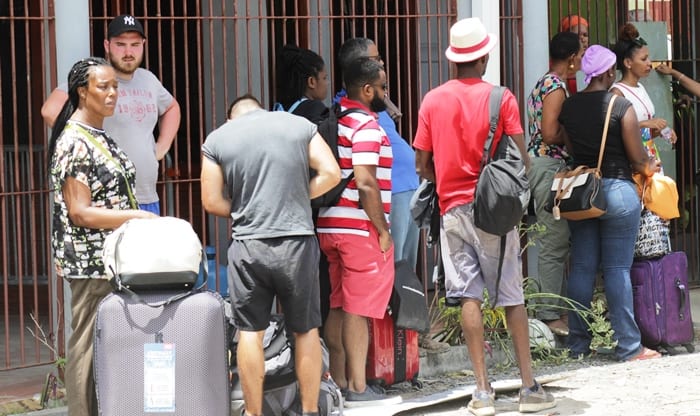 We just want to go home!

That was the cry yesterday of several British, American, Chinese and CARICOM visitors to Dominica outside the entrance of was once the Customs and Immigration area, as they awaited word on when they would be repatriated following the passage of Hurricane Maria on September 18.

Among those waiting was Nubiene Peltier, who arrived in Dominica on September 7, for a vacation from England. “I stayed in Barbados for three days first because of [Hurricane] Irma, then I got a flight and came here to Dominica,” she explained, noting she had family on the island.

However, Hurricane Maria struck the island, severely damaging the rented apartment where Ms. Peltier was staying in Belfast. “Right now, I just want to go home,” she cried yesterday, adding getting information was proving tedious.

American visitor, Keely Hayes, was also counting her lucky stars and hoping to be returned to her homeland soon. She told the Barbados Government Information Service that she was staying at the Flamboyant Hotel when the hurricane struck.

“The windows broke and a part of the roof collapsed,” she recounted, noting that her first brush with a hurricane as an adult was a “scary” experience.

Despite her ordeal, Ms. Hayes, who is also a member of the American Peace Corps, said she felt safe and was already looking forward to visiting Dominica again. “I want to see how it has progressed and how the citizens are able to rebuild,” she said with optimism.

She was joined by a number of other America visitors waiting to be evacuated to St. Lucia, where they would then get a connecting flight to their homeland in Washington DC.

However, while David Williams is anxious to return home to his wife and family in Guadeloupe, the devastation left behind by Hurricane Maria in his native Dominica was unbearable.

“It was like an atomic bomb exploding. There is no water, no food, just desperation and looting,” he said when asked to describe Hurricane Maria.

But, even as he awaits word as to when he could leave to return to Guadeloupe, Mr. Williams is appealing to his Caribbean neighbours and international organisations for assistance for Dominica.

“Do something; we need your support because what is happening here is unimaginable,” he urged, while encouraging them to come and see the situation first-hand for themselves.