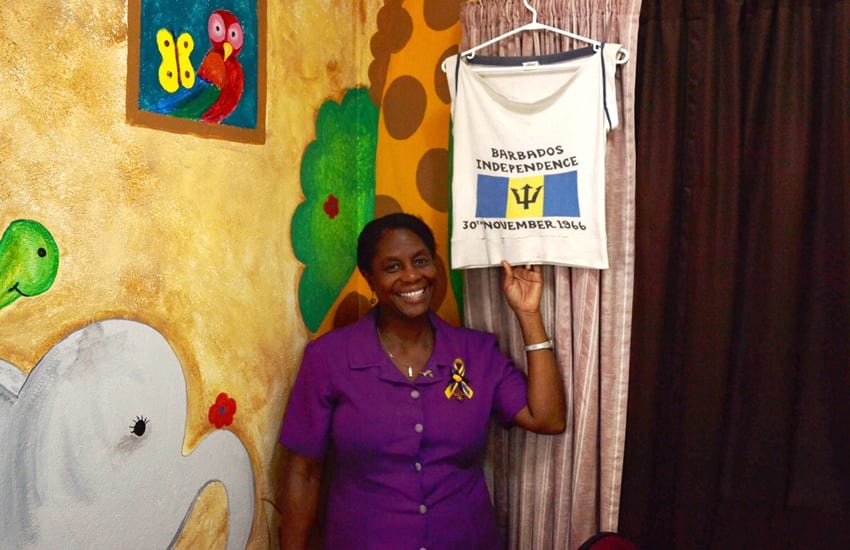 Some things are just meant to be cherished for generations. Like Maylene Gibbons’ patriotic shirt, purchased on November 30, 1966, to wear to the Independence ceremony tht night.  Her daughter, Sondra Tull, excitedly shared the story with her younger colleagues.

“My mum kept this shirt for all these years because she liked it and she never thought she would have had it for 50 years, and so I decided to borrow it from her, just to show these young people that this shirt is older than they are and they were amazed to see this shirt,” she said.

Her mother, Mrs. Gibbons, recalls walking through town searching for the ‘perfect top’, which incidentally, still fits her today.

“I got that shirt from either Broad Street or Swan Street, I can’t remember, but most likely it was Swan Street because in those days you could buy something from Broad Street, but you didn’t feel welcome. Sometimes they would tell you, ‘you can’t buy that’. Things were always more expensive in Broad Street,” Mrs. Gibbons said.

“The last bus was at 12. I got a drop to Black Rock and then had to walk to Payne’s Bay, St. James. Some people had to walk from Black Rock to St. Peter, but they didn’t mind that because at least they were there,” she reminisced.

Reflecting on a pre-independence Barbados, she pointed out that before 1966 some health and education services were ‘limited but now open to everybody’.

“St. Leonards’ Boys’, St. Leonards’ Girls’ and Ellerslie, known then as comprehensive schools, were all opened in 1966. Those are the three I remember,” she recalled.