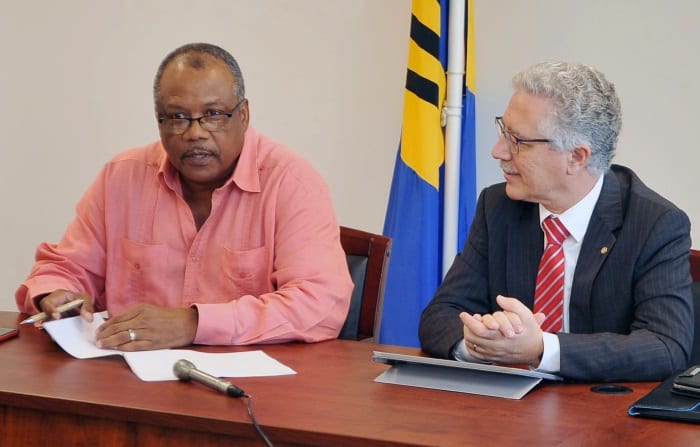 Minister of Health, John Boyce speaking at a media briefing today. Looking on is PAHO/WHO Representative for Barbados and the Eastern Caribbean, Dr. Godfrey Xuereb. (A.Miller/BGIS)

Government announced today that it has expanded its use of antiretroviral therapy (ART) to treat people living with HIV from the moment of diagnosis.

Health Minister John Boyce explained at a media briefing that Barbados was adopting the “Treat All” recommendation by the World Health Organisation (WHO) in September 2015 that all people living with HIV should start treatment as soon as possible after diagnosis.

According to the WHO, clinical trials showed that the early and expanded use of antiretroviral treatment saved lives by keeping people living with HIV healthier and also reducing the risk that they will transmit the virus to partners.

Mr. Boyce said that Barbados has always adhered to clinical guidance from the WHO on when antiretroviral therapy should be initiated.

Following the latest WHO recommendation in September last year, the Ministry of Health adopted the “Treat All” approach in January this year, where all persons with HIV would be offered lifelong therapy, irrespective of their CD4 count.

The Health Minister said that this was followed by the full implementation of the “Treat All” approach at the Ladymeade Reference Unit (LRU) in October, and from today, the programme was being implemented island-wide.

He emphasised: “Therefore, the initiation of antiretroviral therapy in Barbados is no longer dependent on the extent of progression of their HIV, but from the moment of diagnosis.”

Government is currently spending $6 million a year to provide medical care to persons living with HIV, and in this financial year, the Ministry of Finance has provided an additional $500 000 in recognition that “starting ‘Treat All’ would be an investment which would reduce health costs in the long run,” Mr. Boyce said.