The following was issued on Sunday, October 30, 2011, when Sir Clifford demitted the office of Governor General.

The idea of prolonged, sterling ‘service to country and Queen’, particularly at the highest office of the land, and at an advanced age as well, could easily overwhelm the faint-hearted; but this was not the case with the seemingly enduring Sir Clifford Straughn Husbands, this island’s sixth Governor General.

For over 15 years, he has been the face and presence of officialdom, in the role of head of state on formal occasions, where “pomp and ceremony” was the order of the day.

With the official announcement that he is demitting office, the thought of a perennial Sir Clifford not greeting ambassadors as they present their letters of credence at Government House, or not officiating or being the centre of attention at national events, or not delivering the Throne Speech at the opening of another parliamentary term, or not giving the oath of office to a Minister of Government on the assumption of office, seems as far-fetched as the proverbial fable.

For in fact, he still possesses that agility, fertile mind, sharpness of intellect and demeanour that belie his octogenarian status

As if he were destined for high office, Sir Clifford assumed the role as Her Majesty’s representative back on June 1, 1996, at a time when the country would have gone through a period of bereavement and reflection six months earlier with the passing of his predecessor, the affectionate Dame Nita Barrow.

To say he brought his own inimitable stamp to the office, which he performed with impressive dignity and much aplomb, may be somewhat of an understatement.

Indeed, a sense of occasion and attention was always evident, particularly when he paid his almost weekly call on those elderly folk who would have reached the centennial milestone. Effervescence would ooze as he brought cheer and the customary greeting from Her Majesty.

His impeccable ‘savoir faire’ demonstrated a level of empathy towards them as he made them feel at ease and honoured. In celebrating with the centenarians he would always engage them in dialogue, while they reminisced as if they were long, lost pals. 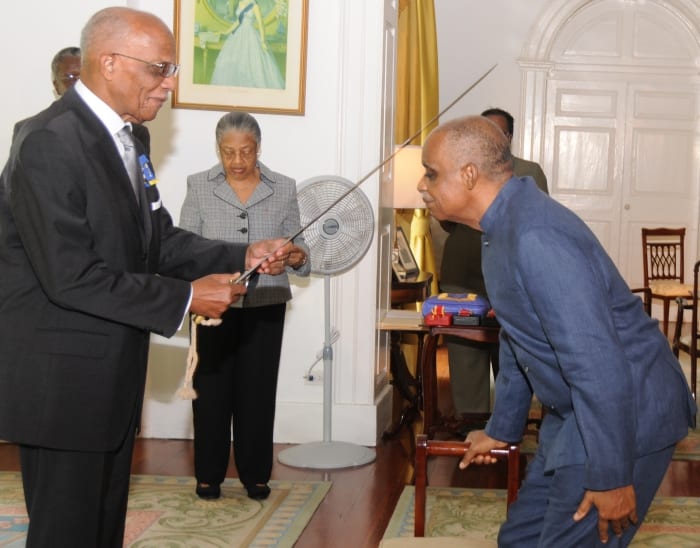 In one of his last official acts, former Governor General, the late Sir Clifford Husbands, is pictured conferring the title of Knight Bachelor on Professor Emeritus Woodville Marshall. (FP)

We at the BGIS would have had several opportunities not only to be present at his many official engagements, but to interact with him from time to time, usually after these functions. On those occasions, he was always gregarious and keen to show that he still possessed the common touch.

He would be his usual classy but effusive self after officiating, whether it was at the presentation of insignia to other outstanding Barbadians at Independence time, or the Queen’s New Year’s or Birthday Honours, or for academic excellence at the annual Rhode Scholarship Awards or the Duke of Edinburgh Awards; one would see that side of Sir Clifford that transcended the ceremonial aspect. Many times he would be witty while being very decorous, and at the same time candid and dégagé.

All this speaks volumes of the character of the man who served this country in a legal capacity for 35 years, prior to being appointed Governor General in 1995.

His outstanding service to his native Barbados dates back to 1952 after he qualified as a barrister at the Middle Temple, Inns of Court, in the UK. He had a brief stint acting as Deputy Registrar here, before going to work in the legal services of Grenada, Antigua and Montserrat and the Attorney General’s Chambers in St. Kitts, Nevis and Anguilla.

Those duties would have surely prepared him for the role he was to play as one of Barbados’ most distinguished Heads of State. 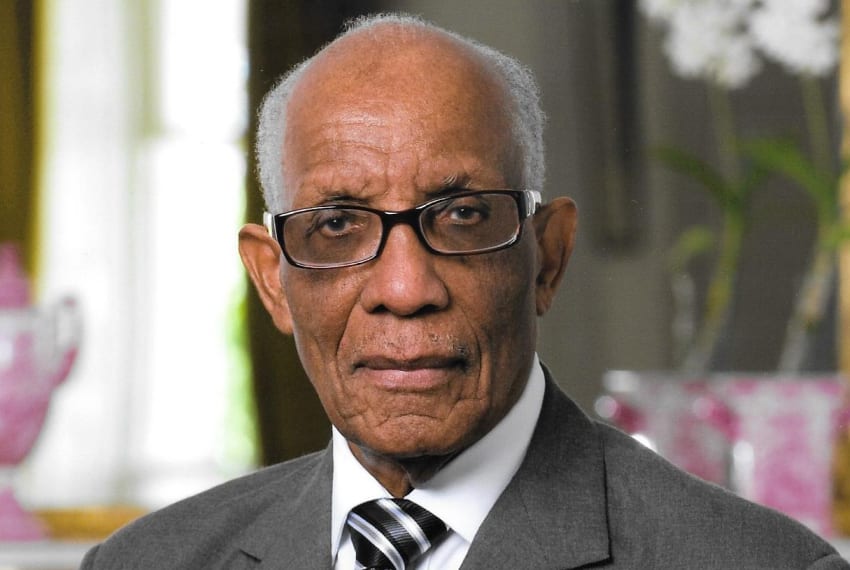 When he was appointed Governor-General in 1996, his obvious charm, intelligence and self-assurance maintained the distinction and honour associated with the office.

Barbadians from all walks of life can attest to the warmth and grace which he exuded as he interacted with citizens. These qualities of his stewardship have been highlighted in the media over the years. In addition, his grasp of national and international issues was captured in his many Christmas messages which he delivered to this nation.

From all reports, his work with Senator Francis Chandler and her young charges, in their annual agricultural, summer camps, was as rewarding to the participants as it was to him.

I am sure all Barbados would want to join us in thanking him for his outstanding service and wish him a long and fulfilling retirement, indulging in his love of books, music, photography and cricket, and his interest in local, regional and international affairs. May he, in his retirement, be encircled by the love of his immediate and extended family and his many friends.