Trident On Display At Foreign Affairs 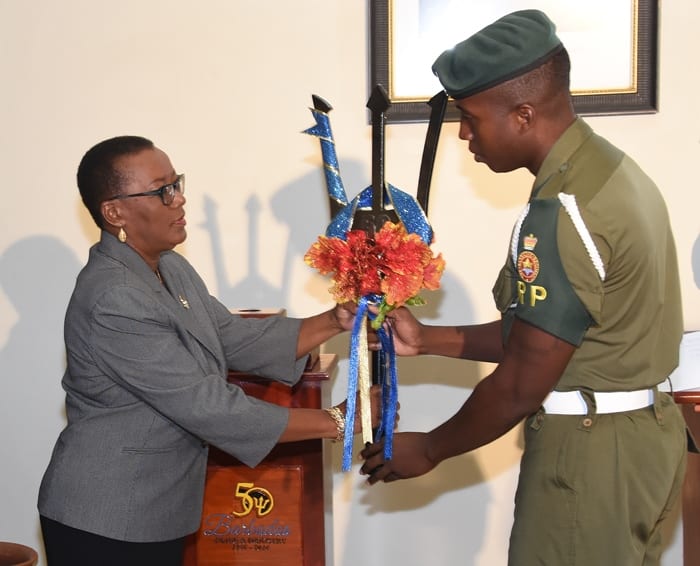 With Barbados’ 50th anniversary of Independence fast approaching, Minister of Foreign Affairs, and Chairperson of the 50th Anniversary Independence Celebrations Coordinating Committee, Senator Maxine McClean, is hoping the symbolic act of receiving and displaying the commemorative broken trident will ignite a greater sense of patriotism in all Barbadians.

Speaking this morning during a brief ceremony to mark the arrival of the broken trident at the Ministry’s Culloden Road office, Senator McClean stated that the Ministry of Foreign Affairs and Foreign Trade has been central to the Independence project.

She said: “The core of our foreign policy as promoted by this Ministry from its inception has been succinctly captured in the phrase of our Father of Independence and National Hero, the Rt. Excellent Errol Barrow, when he stated, ‘We are friends of all and satellites of none.’”

Explaining that the broken trident was a fitting portrayal and graphic representation of the general concept of self-identity, self-determination and sovereignty, Ms. McClean added that she was delighted to be part of the ceremony, not only as Minister and Chairperson, but as a fellow Barbadian.

The commemorative broken trident was first handed over by Governor General, Sir Elliott Belgrave, on November 30, 2015, thus signalling the start of the Carrying of Pride programme.

Since then, it has travelled across the country, starting on January 6, 2016 when it was handed over to the St. George Parish Ambassadors. It has now been to eight parishes. The broken trident is accompanied by a Pledge book which has captured the pledges of Barbadians at home and abroad.

The Minister explained that the I Pledge Programme highlighted a different theme each month. The theme for August is: Commit to Barbados with special emphasis on the Diaspora.