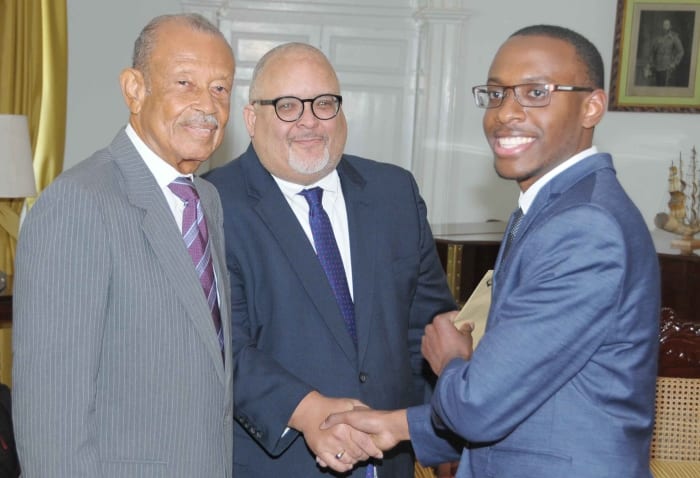 Mandela Patrick (right), winner of the 2018 Rhodes Scholarship, is presented with his documentation by Secretary for the Commonwealth Rhodes Scholarship Selection Committee, Peter Goldson, at Government House yesterday while Chairman of the Committee, Acting Governor General, Sir Philip Greaves, looks on. (B.Hinds/BGIS)

Mandela Patrick is the 2018 winner of the prestigious Commonwealth Caribbean Rhodes Scholarship.  The affable 22-year old, hailing from San Fernando, Trinidad, emerged tops from a competitive field of eight other scholarship hopefuls.

The announcement was made this afternoon by Acting Governor General, Sir Philip Greaves, during the official awards ceremony at Government House. Sir Philip chaired the meeting of the Rhodes Scholarship selection committee earlier that day. An elated Mr. Patrick will be pursuing a two-year Masters in Computer Science and Statistics at Oxford University, London, come next October.

He added: “It has been a six month process for me…and it is really great that I get this opportunity to be rewarded on the biggest stage and it has been a really wonderful experience.  I have met so many qualified Caribbean people and the Caribbean is in really good hands.  It has been a rewarding experience for me. I learnt so much about myself and the impact I want to have on the Caribbean and I am excited about my journey going forward.”

Mr. Patrick a former student of Naparima College in Trinidad, is currently pursuing Computer Science at Harvard. He said as a Varsity Squash player for Harvard, balancing sports and academics was challenging.

“It is a 20 hours per week time commitment to squash and a big time commitment to computer science.  So, one of the most rewarding things is to gain time management skills, while I really get to craft my skills at the highest level and push myself like I never had before. It has been a long, tough journey balancing both sports and academics but it has been rewarding and I am happy I have done it!” he emphasised.

To others pursuing academic studies and working towards achieving scholarships, he advised them to work hard, set their goals and work hard to achieve them.

At the end of his course of study, Mr. Patrick plans to use his knowledge to transform the Caribbean through technology, in particular education, given his experience with applying machinery at companies such as Facebook and Goldman Sachs and expressed the desire to bring this technology to the region.

Meanwhile Secretary for the Commonwealth Rhodes Scholarship Selection Committee, Peter Goldson, said the nine candidates this year were among the highest interviewed and said the decision to choose the scholar was extremely difficult.

“Every candidate could have been awarded the scholarship and the same was true for the candidates here today.  It was an extremely strong field and what pained us this year is that there is only one scholarship,” he noted.

Mr. Goldson said in the past two scholarships had been awarded but due to financial constraints in the early 2000’s, the award was cut to one by the Rhodes Trust.  However, the Selection Committee Secretary remained hopeful that the second scholarship would be restored.