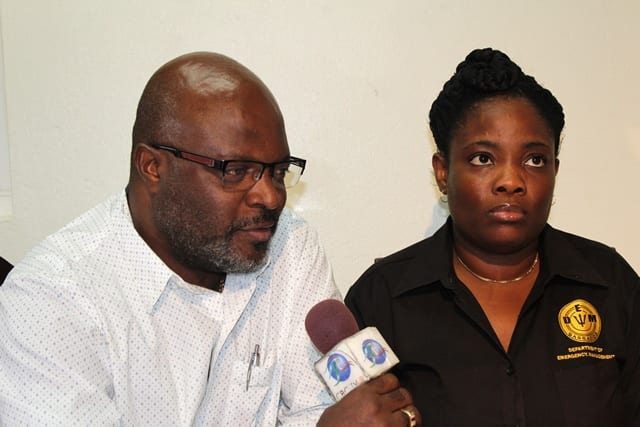 Attorney General and Minister of Home Affairs, Adriel Brathwaite and Director of the Department of Emergency Management (DEM), Kerry Hinds addressing the media during a briefing on Tropical Storm Matthew today. (A.Skeete/BGIS)

Stay indoors for your own safety!

That is the strong advice from Director of the Department of Emergency Management (DEM), Kerry Hinds, as the island feels the effects of Tropical Storm Matthew.

Speaking during a media briefing today at the National Emergency Operations Centre at the DEM, Ms. Hinds said the island was now under a tropical storm warning, which meant that tropical storm conditions (with winds between 34 and 73 mph) were expected within 36 hours. A small craft warning is also in effect for above normal swells.

“We continue to monitor the progress of this system and advise all persons to exercise all the necessary precautions and remain indoors for your safety until further notice,” she stated.

She further urged persons living in low lying and flood prone areas to take all necessary precautions, and to seek shelter with family first before going to a hurricane shelter.

There are 20 category one shelters open across the island, with persons presently at those at The Lester Vaughan School, Combermere, St. Christopher’s Primary and Hillaby Turners Hall Primary.

The Director noted that heavy rains and winds were being experienced by some parishes, with the electricity supply in Dukes, St. Thomas; Maxwell and Oistins, Christ Church; and some parts of St. Joseph and St. Michael, being disrupted. Later reports indicated that power had been restored to the Maxwell and Oistins areas.

However, Ms. Hinds stressed that emergency response personnel, including those from the Barbados Light and Power, were on standby to respond to incidents, but would only do so after conditions improve. “No one is out in the field at this time,” she emphasised.

She noted that the National Emergency Operations Centre was activated since 10:00 p.m. on Tuesday, and remained active to allow stakeholders to monitor the system and make critical decisions.

Ms. Hinds said that another advisory would be issued at 6:00 p.m. or sooner depending on the weather conditions.