Multifarious, winners of the senior category of the Community Dancefest Competition, receiving their trophy from Parliamentary Secretary in the Ministry of Finance and Economic Affairs, Senator Jepter Ince. (GP)

They are Deacons Eagles Academy and Multifarious, who emerged victorious in the Junior and Senior levels, respectively, at the 12th edition of the Community Development Department’s (CDD) Community Dancefest Competition.

The finals, which take place annually on January 21, Errol Barrow Day, saw a total of 14 dance groups competing this year for the coveted titles.

Speaking on the night of the show, Chief Community Development Officer at the CDD, Patricia Hackett-Codrington, said she was very pleased with the level of performances and talent which was displayed.

She noted that she had seen “significant improvement in the dance groups from the inception of the competition until now” and commended all persons who played a role in getting the dancers to this stage. 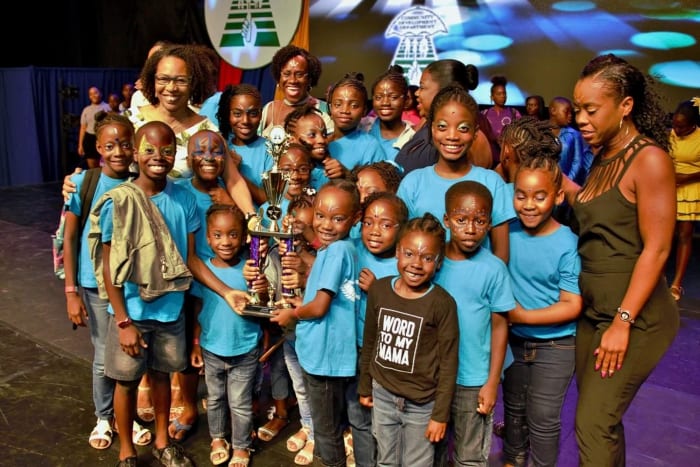 First timers to the competition, Deacons Eagles Academy, showed that they had ‘the stuff’ that winners are made of when they dominated the Junior leg of the competition. Their company featured dancers as young as three years and up to age 13. The Livvy and Betty Alleyne Dance Centre had to settle for second place, while Praise Academy of Dance Promise were awarded the third place prize.

The seniors in the competition provided patrons with a variety of dance genres to enjoy, ranging from liturgical to passa passa to ballroom. However, it was the four males from Mulitfarious who received the judges’ nod.

The group has been entering the competition since 2013, placing second in 2014 and third in 2015. This year, they beat the Livvy and Betty Alleyne Dance Centre and Inside Out into second and third place, respectively. Praise Academy of Dance Destiny took the prize for fourth place.

Sunday’s finals were the culmination of six months of intense competition from dance groups across the island.