UDC Praised For Its Work To Help Poor 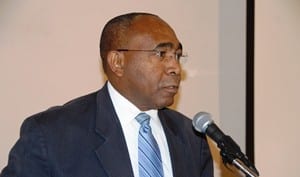 Minister in the Office of the Prime Minister, Senator Darcy Boyce. (FP)

The Urban Development Commission (UDC), which is celebrating its 20th anniversary, has placed particular priority on meeting the essential needs of the poor.

In recognition of this, Minister in the Prime Minister’s Office, Senator Darcy Boyce, speaking at a church service in observance of the anniversary, said: “We have therefore ensured that the UDC remains alive and has some resources to carry out its mandate.”

Senator Boyce noted that in “tight economic times”, the UDC had still been able to engage individuals and companies in partnerships that brought relief to the vulnerable. This, he said, was to be commended and must be intensified.

He outlined the flagship programmes of the Commission as house repairs; transferring land titles; constructing urban roads; demolishing old and derelict buildings; providing ramps for the elderly and the challenged; and attacking poverty in urban Barbados.

The staff of 52, Senator Boyce revealed, had now expanded its programme to include the Deacons Development Centre that provides skills training and community activities; a garden competition which is being widened to include the entire urban community; and waste disposal and monitoring of gullies and waterways for garbage disposal. It is also seeking to build partnerships with non-governmental organisations.

As it enters its 21st year, the Minister challenged the organisation “to increase the drive to rebuild the ethos embedded in our traditional Barbadian culture of the communities together raising their children and supporting their members in what is excellent and of good report, and preventing the efforts that would destroy that virtuousness”.