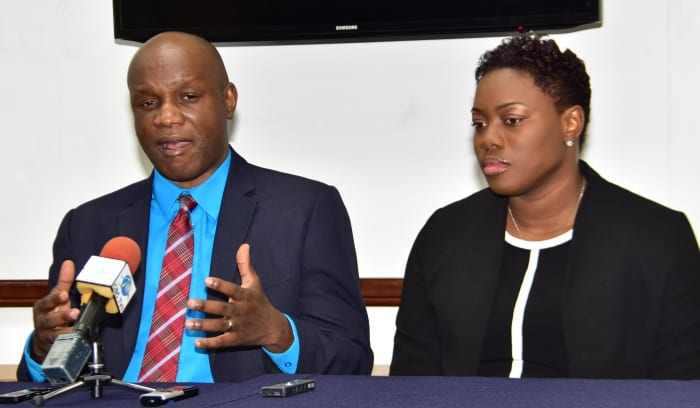 With cyber-attacks on the rise across the Caribbean, Chief Executive Officer of the Caribbean Israel Centre for Cyber Defense (CICCD), Andre Thomas, has recommended that authorities in Barbados and the region make provision for enhanced legislation and law enforcement capacity, to counter the issue.

He was speaking at a press conference at the Barbados Investment Development Corporation (BIDC) yesterday, to explain the implications of the General Data Protection Regulation, cyber security legislation recently introduced by the European Union. He also elaborated on cyber security in Barbados and the rest of the Caribbean.

According to Mr. Thomas, the region was viewed as an easy target by hackers, given its limited cyber security infrastructure: “They’ve been major hacks recently in the last six weeks. There was a major hack in St. Maarten, another one in Guyana…. We’re aware of hacks taking place all over the region. And they’re mostly underreported,” he revealed.

While expressing concern about the reluctance to report such incidents, the CICCD official maintained that insufficient training and legislative provisions were among some of the hindrances.

“[Hacks] are underreported because our law enforcement agencies, though very passionate and very willing to make a difference in this area, still have areas of development in terms of being able to deal with cybercrime.

“Most of the jurisdictions do not have cybercrime legislation. Most of the police departments do not have forensic cyber detection capacity. There’s so much that has to be done,” Mr. Thomas explained.

Turning his attention to the new General Data Protection Regulation, introduced by the European Union, the CICCD’s Chief Executive Officer pledged his organisation’s continued support to assisting Barbados and its regional neighbours. The law will take effect on May 25, 2018.

A company or organisation would be held liable for personal information belonging to an EU citizen or business stolen via a cyber-attack. Included in the stipulations would be a financial penalty, which means the entity would have to forfeit four per cent of its global turnover, or be fined a maximum of 20 million Euros.

Stressing the importance of becoming compliant with the European Union’s new cyber security legislation, Mr. Thomas stated: “We exist to bring the best of Israeli technology to the governments of the region and the private sector to help in bridging this very significant gap, that has to be bridged in a very short time.”