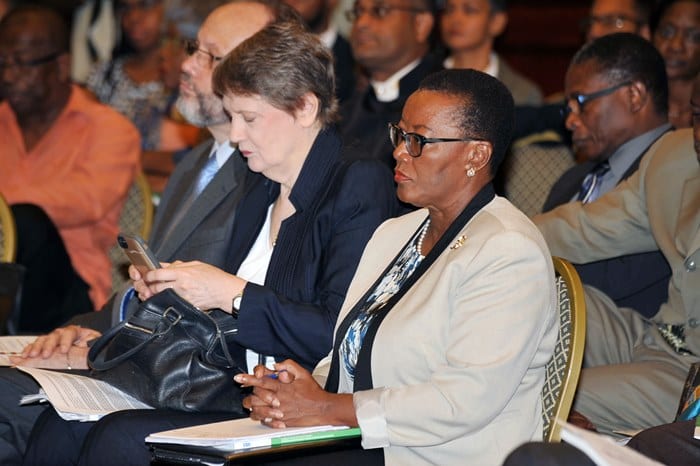 Barbados has thrown its support around the UNDP’s recent Caribbean Human Development Report, which one Government Minister says addresses some of the island’s concerns.

Minister of Foreign Affairs and Foreign Trade, Senator Maxine McClean, intimated this today as she addressed the launch ceremony of the Report at the Hilton Barbados Resort.

Senator McClean said of the document, entitled: Multi-dimensional progress: human resilience beyond income: “It is a clear demonstration… that our consistent and persistent advocacy against a ‘one size fits all approach’ to development has been heard and accepted.”

Acknowledging that it fitted neatly with what the Caribbean had identified as its core development issues – vulnerability, resilience and sustainability – she recalled the 36th Meeting of the Heads of Government of Caricom, held here in June 2015, had also highlighted these.

“They [Heads of Government] emphasised the particular nature of SIDS (Small Island Developing States), which made them a special case for sustainable development, and called for measures to address the inherent and permanent vulnerability, and in particular to facilitate resilience building and economic natural and social systems,” she said.

Stating that Barbados continued to face inherent as well as exogenous challenges, the Minister said these related to its geographical location making it vulnerable to natural disasters and climate change; and its small size limiting its capacity and openness that made it vulnerable to externally imposed economic and financial practices, such as correspondent banking, with which the island is grappling.

However, the Foreign Trade Minister pointed out that Barbados’ success in pursuing strategies which have fostered a measure of resilience, has resulted in its classification as a high income state based solely on its GDP per capita.

“This in turn has increased our vulnerability since graduation from concessionary financing, and this of course has meant a greater debt burden with its resulting effect on the quality of human development,” she stated.

Senator McClean noted the island was working to adopt more effective strategies to strengthen social, economic and environmental resilience with the main aim of promoting sustainable growth and development, and she assured the UNDP representatives and local, regional and international delegates present of Government’s commitment to creating a resilient economy for all Barbadians.

Lead Author of the Caribbean Human Development Report, Dr. Compton Bourne, said it conveyed the concept that human progress was not unidimensional and it would be a huge strategic error to measure human progress only by growth of personal incomes or by aggregate economic growth, and not to examine as well the factors which determine human resilience.

Speaking to the four key messages contained in the report, he said countries in the region must boost inclusive economic growth and simultaneously seek to achieve multidimensional progress.

“Secondly, there is increasing human vulnerability in the Caribbean; third, sluggish economic growth has constrained multidimensional progress, the region needs to act decisively to accelerate its economic growth rate; and fourth, the Sustainable Development agenda requires policy initiatives that build upon interrelationships across sectors, institutions and actors,” he stressed.