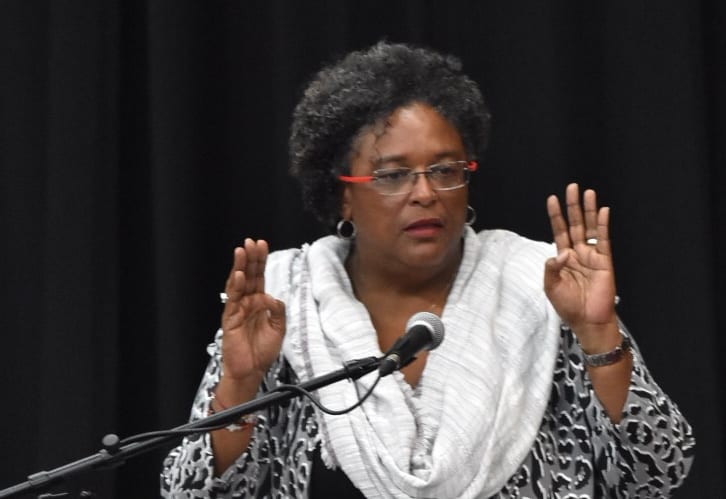 Prime Minister Mia Amor Mottley addressing staff and students of the University of the West Indies, Cave Hill Campus yesterday during “A Conversation with the Prime Minister”, in Lecture Theatre 1, of the Roy Marshall Teaching Complex. (C.Pitt/BGIS)

Some displaced public workers should find employment in a number of upcoming projects.

Word of this has come from Prime Minister Mia Amor Mottley, who said $100 million in road works would be executed as a result of loans from the Caribbean Development Bank, Inter-American Development Bank and CAF.

She listed some of the other projects as a $900 million project Sandals would be starting in Speightstown; and Sagicor’s Senior Citizens Village at Boarded Hall, both to begin next January.

Ms. Mottley made the comments last evening when members of staff and students of the University of the West Indies, Cave Hill Campus, had “A Conversation with the Prime Minister”, in Lecture Theatre 1, of the Roy Marshall Teaching Complex.

She pointed out that Government was trying to revolutionize how things were done. She explained that it had asked the Inter-American Development Bank (IDB) to fund a project to digitize its records and the Minister in the Ministry of Economic Affairs and Investment, Marsha Caddle, was in conversation with that institution.

“But what we have tried to do is to take those persons for whom we feel there is a bright future and for whom from early next year, can come back and work with companies and digitize all of Government’s records. At the same time that we are doing that, I have created…a Ministry of Innovation, Science and Technology because we have literally to digitize and introduce technology in every aspect of what we do, without losing the sense of who we are and the ethical component that is so critical for us as human beings….

“We will have a digital ID in Barbados and we will announce the details of that in the near future….,” she revealed.

Ms. Mottley disclosed that talks were ongoing with a major technology firm to see if it could do some of its summer coding camps here.

She underscored the importance of the Retooling and Empowering, Retraining and Enfranchising (RE-RE) programme, saying Barbados had to become a training campus for the next four years.

The Prime Minister further disclosed that Ross University, which is expected to open in Barbados in January, would give those displaced Government workers a five-day advantage on persons applying for vacancies.