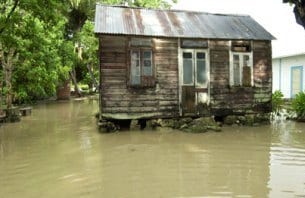 A flood watch is now in effect for Barbados.

The flood watch was issued by the Barbados Meteorological Service today at 12:30 p.m., and is expected to remain in effect until 6:00 p.m.

Acting Director of the MET Office, Sonia Nurse, explained that a band of showers propagating northwest-wards from Potential Tropical Storm No. 2 will bring some moderate to heavy showers across Barbados this afternoon.

She warned that these showers will be accompanied by brisk surface winds of 25 to 35 knots (35 to 50 km/h) with higher gusts near showers.

“Rainfall accumulations of one to two inches (25 to 50 millimetres) are possible [and] some flash flooding is likely in low-lying areas,” she cautioned, noting the flood watch meant flooding was possible.

In addition, large easterly swells of 3.5 to 4.5 metres (13 to 15 feet) are also expected to accompany the winds. As a result, a high-surf advisory and small-craft warning is in effect for Barbados until tomorrow, Tuesday, June 20.

“A small-craft warning means in this case, that seas equal to or greater than 3 metres (10feet) and winds of at least 25 to 33 knots are already affecting the marine area. A high-surf advisory is issued when breaking wave action poses a threat to life and property within the surf zone.

Ms. Nurse further advised residents to remain on the alert and take all necessary precautions.

She was supported by Director of the Department of Emergency Management, Kerry Hinds, who again cautioned residents to remain vigilant, pay attention to updates and be prepared.

Further information may be obtained by dialing 976-2376, or by accessing www.barbadosweather.org, or the DEM’s Facebook page.