US Envoy Impressed With BVTB Students 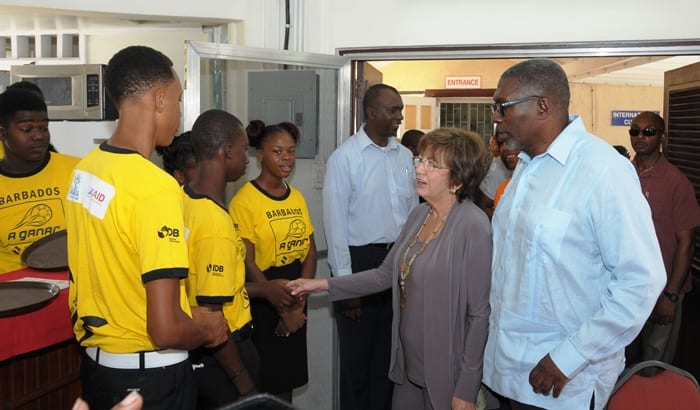 US Ambassador to Barbados, Linda Taglialatelia and Parliamentary Secretary in the Ministry of Education, Senator Harry Husbands greet students in the BVTB’s Bar and Restaurant Services course during a visit to the All Saints Centre on Wednesday. (B.Hinds/BGIS)

The students enrolled in the Barbados Vocational Training Board’s (BVTB) Bar and Restaurant Services course have come in for high praise from United States Ambassador to Barbados, Linda Taglialatela.

The students showed off their skills last Wednesday as they blended and served a variety of non-alcoholic drinks to Parliamentary Secretary in the Ministry of Education, Science, Technology and Innovation, Senator Harry Husbands; Permanent Secretary, June Chandler; and other officials from the Ministry, the United States Embassy and the United States Agency for International Development (USAID).

During a brief ceremony at the BVTB’s All Saints, St. Peter, training facility to update the Ambassador on the progress with the A Ganar Program, the Ambassador told the students that she was inspired by the students’ determination as they prepared the cocktails under the guidance of their instructor, Michael Forde.

She added: “…Some of you may start off waiting tables and before you know it, you could possibly own your own restaurant or your own hotel. So, keep training and keep working hard.  It is giving you the opportunity to see what is out there [and] to learn something about a new trade. You also learn some very basic things that will carry you through your life no matter what you end up doing in the end and that is very important.”

Senator Husbands applauded the work of A Ganar to date, and thanked the Inter-American Bank and USAID for providing the funding to keep the youth engaged in positive activity.

Meanwhile, 17-year-old Donte Mayers, a student of St. Leonard’s Boys’ School, said viewing photographs of the cocktail drinks one of his friends he mixed at his job inspired him to enroll in the programme.

His long term goals are to further his studies in the area, work for someone initially and then to own his own business.

The participants will soon be taking up internship positions at various restaurants and hotels across the island to further test the skills learned at the course.

The BVTB also presented the Ambassador with two mahogany bar stools as a memento.

A Ganar is one of the initiatives under the Skills for The Future Program, which was implemented in conjunction with the Inter-American Development Bank in November 2012.