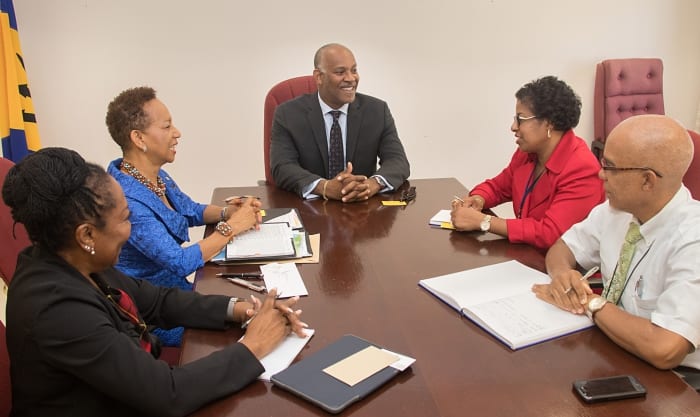 A proposal for Barbados to establish its own law school has been put forward by Principal of The University of the West Indies (UWI), Cave Hill Campus, Professor Eudine Barriteau.

She tabled this proposal during a courtesy call with Attorney General and Minister of Legal Affairs, Dale Marshall; Permanent Secretary, Yvette Goddard; and Deputy Permanent Secretary, Charles Piggott, at the Ministry’s Wildey, St. Michael office today. Director of Institutional Planning at the UWI, Gale Hall, was also present for the visit.

Professor Barriteau explained that she saw the establishment of a law school as not only being able to cater to Barbadians but those from across the Caribbean and as far as England.

She asked the Attorney General to “consider it seriously”, noting that she would also raise the topic for discussion with the Minister of Education, Technological and Vocational Training, Santia Bradshaw; and Prime Minister, Mia Amor Mottley.

The Professor added that she would like Barbados to be seen as the hub for education in the Caribbean.

In response, the Attorney General said there were a number of issues to be considered in the proposal but he also wanted to hear the opinion of the Council of Legal Education on the matter.

During the courtesy call, other matters discussed included the establishment of a Centre for Food Security and Cooperation, and an upcoming symposium on bio-security issues.