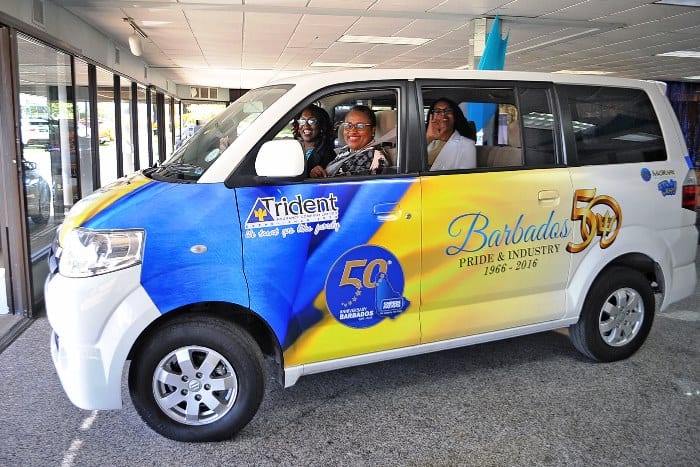 Preparations for Barbados’ 50th anniversary of Independence should become a whole lot easier for the staff of the Celebrations Secretariat, thanks to the donation of a vehicle by Simpson Motors Limited.

The All-Purpose vehicle was handed over today by Chief Executive  Officer of Simpson Motors, Debbie Simpson, to Deputy Chairperson of the 50th  Anniversary of Independence Celebrations Coordinating Committee, Senator Dr. Esther Byer Suckoo, during a brief ceremony at the company’s Warrens headquarters.

In her remarks, Senator Byer Suckoo thanked Simpson Motors for its “thoughtful gesture”, which she noted, came at a critical juncture in the Secretariat’s schedule.

She commended the numerous non-governmental organisations and public and private sector entities for their contributions to the celebrations thus far.

The Deputy Chairperson also called on Barbadians to continue to support and participate in the celebrations, noting every offering, no matter how small, would be welcomed.

She also expressed her appreciation to the additional sponsors, M. Graffix Incorporated, who provided the materials and wrapped the vehicle in the 50th anniversary logo and those of their partners; and Trident Insurance Company Limited, who provided insurance coverage for the vehicle.