They were cut, critically injured and even killed, but volunteers involved in the just concluded Exercise TRADEWINDS 2017, all agree – the experience was worth it!

After enduring the sun, rain, bouts of seasickness and lying on the ground waiting for help to arrive, the volunteers are calling on emergency management personnel to conduct drills across the country more frequently and involve them in the process.

He was among hundreds of volunteers gathered at Consett Bay, St. John, waiting to be “rescued” after the coastal community had to be evacuated after being cut off following a series of earthquakes.

For Angela Fields, also a volunteer at Consett Bay, it was a learning experience which has prompted her to join the District Emergency Organisation for her area and learn more about disaster management.

These are just some of the sentiments expressed by those involved in the Barbados-leg of Exercise TRADEWINDS 2017 which ran from June 6 to 12, under the theme: A Seamless States Partnership for a Secure Region. 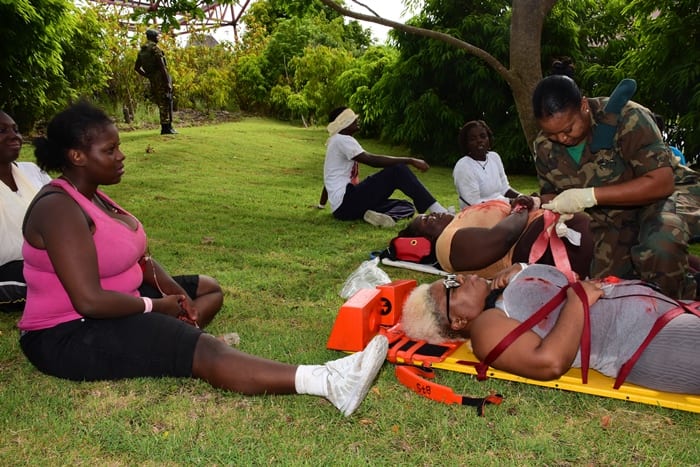 Meanwhile, the 6.4 magnitude earthquake and aftershocks set the scene for the HADR component of the exercise. The earthquake on June 9 resulted in buildings collapsing, landslides, a cave-in at Harrison’s Cave, an entire district being cut off from the rest of the island and even a tsunami threat.

And, the volunteers got right into character from early Friday playing the role of the injured, the dead, and even the rowdy ones in the midst to pick a fight. Emergency responders were pressed into action to respond to the volunteers’ “screams” of agony following a cave-in at Harrison’s Cave which left visitors to the St. Thomas tourist attraction trapped.

Almost simultaneously, another “distress call” went out for a mass casualty situation on the Spring Garden Highway with 120 people injured from falling trees and poles.

There was also a simulated oil spill and explosion at Pile Bay, which resulted in four persons being killed at the nearby Barbados Light and Power Plant.

Captain in the Barbados Defence Force, Debra Marshall, said the scenario involving the explosion at the Plant resulted in a number of injuries, of which five were critical. “These persons were taken to the Queen Elizabeth Hospital, [while] some of them were treated on location.  However, four people “died” in the explosion,” she said.

The scenario intensified when a tsunami alert forced the emergency evacuation of Hilton Barbados, the St. Stephen’s Nursery and Primary Schools, Deacons Primary School and the Queen Elizabeth Hospital (QEH). 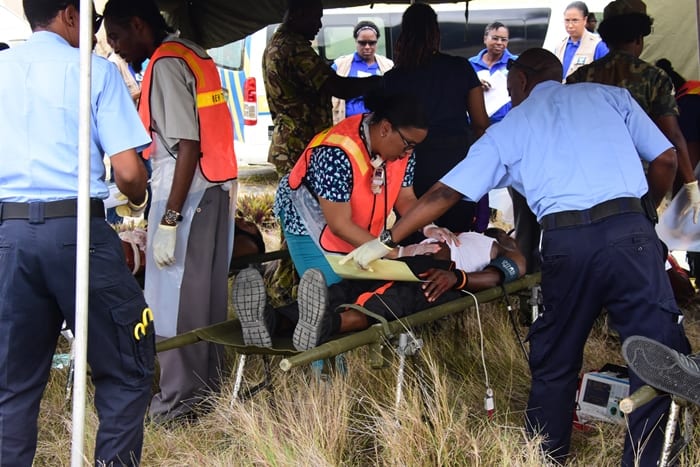 Doctors tending to the “injured” following the “collapse” of the Hotel Glendairy Meadows, the former HMP Glendairy Prisons. (C.Pitt/BGIS)

One of the doctors on site, Dr. Shantal Young-Boyce, explained that one person “died” as a result of the incident, while 25 persons were listed as critical. She said the simulation went well. “When we have actual mass casualties, there are not this many victims,” she said.

The doctor stressed that such exercises were necessary at least twice a year to allow emergency personnel to test their skills and work out challenges.

However, the scenario also extended to the possibility that the earthquake could have caused damage to the island’s coral reefs, resulting in assessment teams being dispatched to check on their stability. It also caused a HAZMAT incident at the QEH.

The plot thickened by day five of the exercise, with the community of St. Marks in St. John being cut off from the rest of the island, causing 122 residents to be evacuated via Consett Bay.

Lieutenant Coast Guard, David Harewood, explained: “What happened is after the earthquake the persons in the community were trapped and unable to get out. They requested assistance [and] the only way they could get from the community was via the sea,” he said.

He added that the Maritime Operations Centre was canvassed and all assets in the area, including Landing Craft Utility vessels, foreign vessels and small boats, were on hand to “rescue” residents and transport them to the HMBS Pelican to safety.

“The volunteers have surpassed my expectations. The Coast Guard will use volunteers in future events going forward,” Lieutenant Harewood said, noting they were also getting feedback from volunteers to see how things could be improved.

Another volunteer noted that the opportunity would allow him to assist the country should there be a real life situation. “When the teams go back we are on our own. We need to get training so we can assist ourselves in similar situations,” he said. 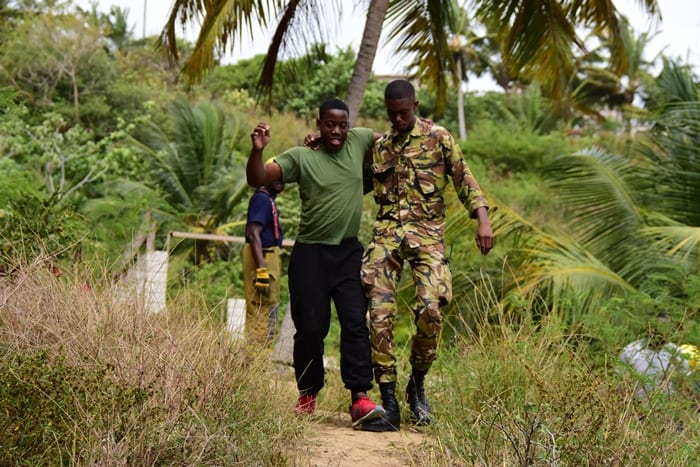 This “injured” volunteer received a helping hand as he was transported to the treatment tent following a landslide at Less Beholden in St. Andrew. (C.Pitt/BGIS)

As the exercise neared its end, a landslide in Chalky Mount, St. Andrew, left persons stranded. Simultaneously, an explosion followed by a collision between party boats, the MC Buccaneer and the Jolly Roger, left some persons badly injured, while others were thrown overboard.

This prompted the Barbados Coast Guard into action to rescue the stranded persons just off the coast of Holetown. At the end of it all, Director of the Combined Exercise Control Group, Major Carlos Lovell, described the exercise as a “resounding success”, which could not have been possible without the assistance of the volunteers.

“Based on the post-mortem, the exercise did not come off perfectly. There were some real world and exercise challenges that were planned in the scenario and some that were not planned,” he said.

However, Major Lovell pointed out that the exercise did highlight the weak areas which could be improved upon by emergency responders.