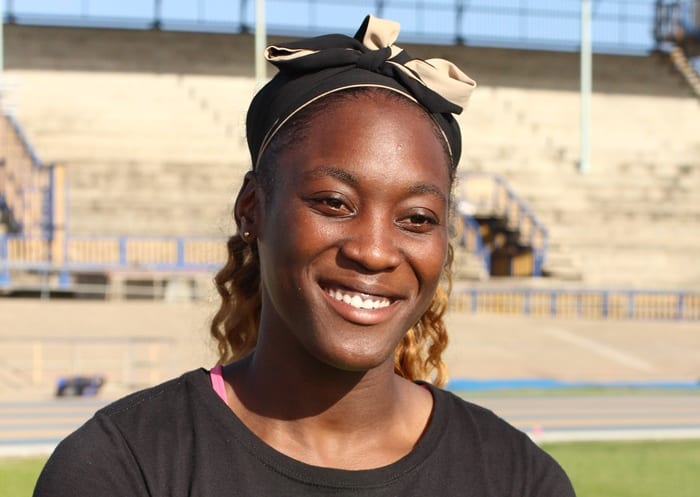 It is often said that it is a test which brings a testimony. How else would we know our limits unless we are tested? As an athlete, 21-year-old Akela Jones tests her physical boundaries every day, pushing herself to the limit in order to develop her talent.

From a tender age, she has had to overcome many personal hurdles in order to get to where she is now, and through each obstacle she has emerged victorious. Reflecting on her earlier years, Akela recalled that spending most of her childhood in a children’s home was not always easy, as she was often teased.

It was difficult for the young track and field star when persons sought to make her feel ashamed about her childhood home. However, with a defiant grin, she stated that she was unphased by the ignorance of others.

“I was not shame at all for living in a children’s home…I grew up in a good environment; the people that lived with us, we were all brothers and sisters. I had a lot of fun, [and] always had a lot of people to occupy my time,” she recalled fondly. She pointed out that the teasing and bullying from those at school further taught her how to stand up for herself.

Despite the odds against her, the alumnus of Hilda Skeene Primary had an ace up her sleeve; she was fast, very fast. Akela recounted that she was determined to use track and field to help her to overcome her personal challenges, and her calculated resolve ultimately led to her also breaking and setting several athletic records.

“From about six years old I realised that, you know what, this [track and field] is really going to be my life and I’m going to use it to elevate myself, my family and the people around me,” she remarked.

Through natural ability and training, Akela gradually became an athlete to watch, winning numerous medals in the national primary and secondary school athletic competitions. In 2014, she won a World Junior Championships Gold Medal in Long Jump; and in 2015, a Bronze Medal in High Jump at the Pan American Games. Akela also holds local records in the Heptathlon, Pentathlon, Long Jump and High Jump.

Looking back at her achievements, the Springer Memorial Secondary graduate and current student at Kansas State University in the United States noted that her athletic career was well planned from the very beginning. According to her, she took her time in the early stages of her primary and secondary athletic training.

“I knew from an early age I would need to be disciplined later on in life…I wanted to have fun [and] I didn’t want to burn myself out in the early years,” she admitted.

With dreams of being the first female to win an Olympic medal for Barbados, the athlete trains twice daily even while on vacation from university, and though she likes to hang out with friends, she does not over-indulge in any activity that would distract her from her main goal.

“I’m not into the big drinking; I put my priorities first, so track and field is first. If I go out late at night I can’t really get up the next morning and train to my maximum potential, and if I do that I would just be believing in a false dream because I don’t want to put in the work and I don’t want to sacrifice.”

With the excitement of the 2016 Olympic Games in Brazil quickly fading into the pages of history, Akela, who did not medal this time, remains positive and motivated about her future.

When asked about her performance she said: “I gave 100 per cent effort in everything that I did. I think that I represented well. Every time I step on the track it wasn’t about how many people are in the stands…all I look[ed] for was that Bajan flag, when I saw the Trident going up in the air, I was like, ‘you know that you’ve got to go up too!’”

For Akela, the recently-held international sporting competition was far from her intended finish line. “I’ve been dreaming about going to Olympics for a very long time. It’s not a one-year plan, it’s not a two-year plan, it’s an ongoing plan. Rio is not the ending; Rio is the start,” she asserted, adding that the 2020 Olympics in Tokyo, Japan, should be a big year for the entire Barbados team.

With all of the focus placed on her athletic career, it would surprise many to know that in reality, she has much bigger plans beyond track and field. Coming from a challenging background, Akela noted that she wanted to use her personal experiences, struggles and victories to guide and inspire young persons in a similar situation. Track and field, therefore, will become her platform to begin to make a positive impact on the lives of at-risk youth.

“I plan to engage in athletics as long as it makes me happy [however] I think the track and field is second to what my biggest passion is: helping juveniles in the juvenile system.”

There is no telling where Akela Jones will go from here but with her track record of soaring above the odds, it is all most certain that this young woman will achieve even greater heights, and will continue testing her limits.