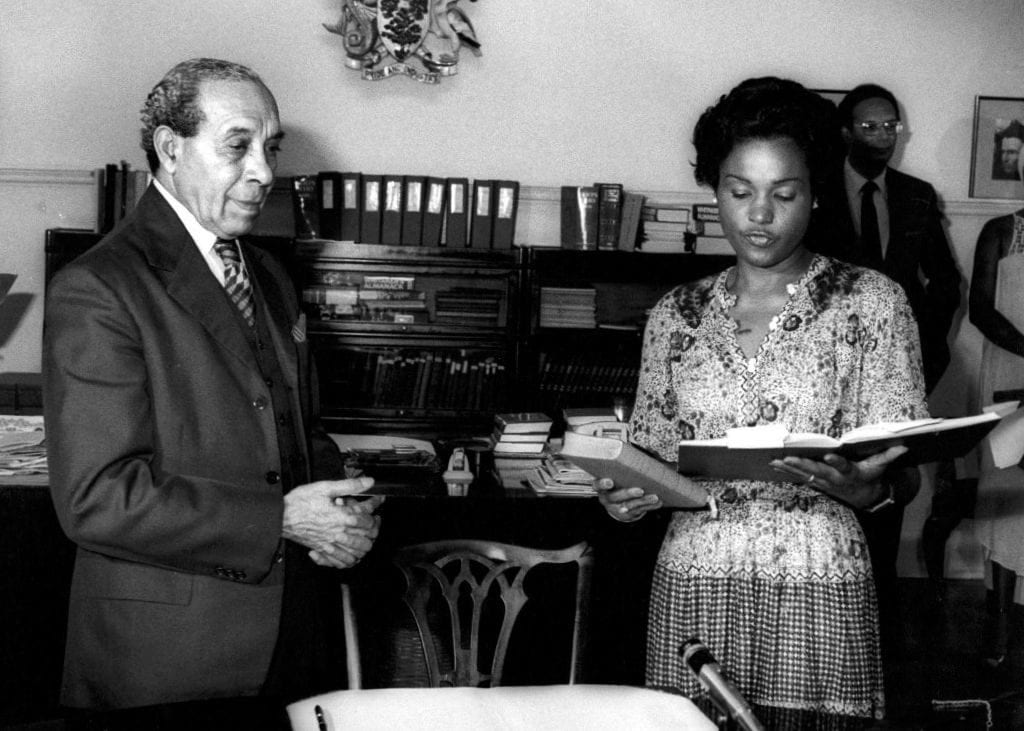 Dame Billie Antoinette Miller has had very successful careers in law and politics but she will be the first to tell you that she chose neither of those paths. Rather, they chose her.

“My father thought that law would be a good profession for me. If I had my own choice I would have chosen social science but in those days, you tended to want to gratify your parents.”

Similarly, when she was invited by the late Prime Minister Tom Adams to enter elective politics in 1976, it was the last thing on her mind.

“I had grand ideas about becoming the General Secretary of the Barbados Labour Party (BLP), bringing new systems in and all sorts of things. One day, Tom Adams walked into my office, the only time that he ever did, put his briefcase on my desk and looked at me and said to me, you have to get ready to run.”

Despite the way she entered these arenas, she embraced them both wholeheartedly. Dame Billie was called to the Bar of England and Wales in 1968 and to the Barbados Bar in 1969.

Her practice was mainly a civil court and chamber practice where she carved out a specialty in Family Law, in advance of modern Family Law legislation in Barbados.

Her graduation to politics followed. “The creature known as lawyer/politician is known everywhere in the world, it’s not peculiar to the British Commonwealth…and it’s a natural progression from the practice of law to the making of laws and that’s how it happened with me.”

Leader of the BLP, Tom Adams, invited her to run to represent the City of Bridgetown after then representative Elliott Mottley left for a diplomatic posting. “I did not know then that he may well have approached, or so I have been told, some of the young men of my generation at the time but nobody wanted to touch the City.”

She did not make up her mind immediately, since, she explained, she was at a very important juncture in her legal career. “I got on an aeroplane, I flew to London, checked into a hotel over Christmas, including Christmas Day, thought and thought and thought, and two days later got on the plane, came back to Barbados and it hadn’t crystallised. And with me, it has to kind of infuse my being, and then I know what I have to do.”

Shortly afterwards however, she decided to take the plunge, after great prodding by the late Sir Harold “Bree” St. John. She subsequently won the by-election on May 12, 1976, and three months later, retained the seat in the general election.

Dame Billie links her association with Bridgetown from birth since for the first year of her life, her family lived at Baxter’s Road before moving to Brighton, Black Rock. But her “love affair” with the City began in earnest around age seven or eight, when she would go into Bridgetown every Saturday morning to visit the Public Library.

Once she got her library books, she walked over to her father’s ice factory on Tudor Street, after which she was allowed to explore Bridgetown as much as she liked, as long as she was back at the factory by midday.  “I think this is where the magic of the City overtook me. This is where, I think looking back, the love affair with the City of Bridgetown began.”

She remembers walking up Tudor Street and admiring the overhanging galleries, the tin merchants and the women with their big trays of ground provisions and raw nuts on Milk Market; Suttle Street filled with the different Caribbean accents as hawkers from Dominica, St. Lucia and other islands sold their wares; and Broad Street, with stores such as Fogarty, the Ideal Store and Harrison’s.

“I went everywhere. Every Saturday, we would take a different route and it was like another world because in those days it was just Rediffusion and books, but within Bridgetown, there was this wonderland and I never lost that feeling about the City of Bridgetown.”

So in 1976, she took her seat in the House of Assembly as MP for the area. And then the unexpected happened yet again. “I was the youngest member of Parliament, I was 32 years old and I had no previous experience in parliamentary matters. It never occurred to me that I would be invited to sit in the Cabinet.”

But invited she was, taking up her first portfolio in the Ministry of Health and National Insurance. There, she made her mark by establishing a network of polyclinics across Barbados based on a model she had seen in Cuba, introducing the National Drug Service; and, under the National Insurance portfolio, implementing unemployment benefits.

Dame Billie’s participation in elective politics lasted for 31 years and during that time she was elected MP for the City of Bridgetown seven times. She served as Minister of Education (1981 – 86), Leader of Opposition Business in the Senate (1986 – 91), Deputy Leader of the Opposition (1993 – 94), Deputy Prime Minister and Minister of Foreign Affairs, Foreign Trade and International Business/Leader of the House of Assembly (1994 – 2003), Minister of Tourism and International Transport (1995 – 1999), and Minister of Foreign Affairs and Foreign Trade (2003 – 2008). She retired from elective politics in 2008.

In retirement, her work to empower women and girls, both in Barbados and internationally, is a top priority. One of her desires is to see more women in elective politics in Barbados. “For the first 18 years that I sat in Parliament, I was the only woman. It was not easy…countless times I wished that there were other women in there to bolster the argument from the perspective of a woman.”

She rejoiced in 1994 when three more women entered Parliament under the BLP banner. “And I give Prime Minister Owen Arthur, as he then was, great credit. There were four women in Parliament when he was Prime Minister and he put all four of them into his Cabinet. There are not many Prime Ministers who would have had the courage to do that.”

She believes the participation of women in Parliament is vital not only to address women’s issues but to have a woman’s perspective on all issues. “I talk to women often about these things and it is concerning that so often women are doing very well in their careers and they say to me, ‘I am well respected in my profession, I’m good at what I do.

If it has to be a rite of passage to go into politics that my name has to be dragged through the mud, I have to be in rum shops and so on, it’s not going to happen.’” But Dame Billie has a counter for that argument. “I tell them you make your own decisions. I never canvassed in a rum shop in 31 years. My canvassers would be in there, my supporters would be in there and they would be talking politics but I have never done that. You set your own rules.”

Today, she continues to be of service to Barbados. She is vice president of the Barbados Association of Retired Persons and deputy chairman of the Electoral and Boundaries Commission. Internationally, she sits on the Board of Women Deliver, a global advocacy group which focuses on the empowerment of women, with particular emphasis on women’s health.

Dame Billie says however that she has committed to slowing down. “My quality of life here (at home) gives me pleasure – the gardens, the beauty of the sunsets, the birdsong. I’m never heading anything again. I’ve had enough of that in my life and I’ve made that clear. I need to be free to move about as I please.”