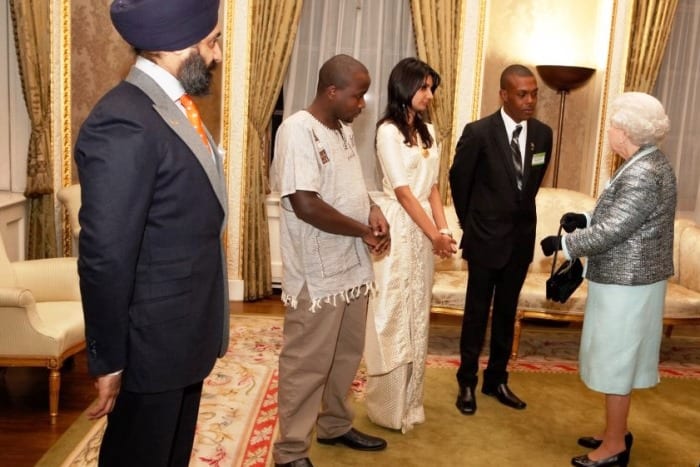 Her Majesty Queen Elizabeth ll chatting with President and Founder of the Barbados Vagrants and Homeless Society Kemar Saffrey (far right), at Buckingham Palace, where he received the Commonwealth Youth Award for Excellence. (GP)

If there is one Bible verse that describes the divine calling of President and Founder of the Barbados Vagrants and Homeless Society (BVHS), Kemar Saffrey, Deuteronomy Chapter 5 verse 33, would be the theme of his gripping life story.

The once “rebellious” teen has today experienced the true meaning of the verse’s message: “Walk in every pathway way that the Lord your God has commanded you, so that life may go well for you; and prolong your days in the land you will possess.”

Kemar Saffrey was born on August 19, 1988, in Westmoreland, Jamaica, to Norma Hinkson, a beautician, and George Saffrey, a chef. At the age of eight, he moved to Barbados with his three brothers Nemar, Lemar – his identical twin brother – and Denmar, the eldest child.

Settling in Sargeant’s Village, Christ Church, Kemar attended the Vaux Hall Primary School and later went on to the St. George Secondary School.  However, unlike some teenaged boys who have proven uncontrollable when pitted against a single mother, Kemar soon learned that his desire to “do as he feels like” would be repressed.

The BVHS head recounted: “As a single parent taking care of four boys, a lot of it was tricky…. She had to make sure that we were getting things done on time and not straying off into the blocks or different areas…

“She was a real strict mom in the way how she dealt with us. Me being on the block was a no-no because if she called and I wasn’t inside to receive the call, it would be a different story… If you said ‘well, I’m a man now and I’m coming home whenever I feel like’, you would greet the door shut and no one else could open it.”

Feeling the pressure of his mother’s rules and other stressors in his home environment, Kemar disclosed that as a result, he went on to experience a brief period of homelessness. It was a process that primed him for the position he holds today.

On October 4, 2009, he received his spiritual call while attending a crusade in Bridgetown held by the Women of Excellence Spiritual Conference Ministry. Moved by what he had experienced at the gathering, 21-year old Kemar gave his life to Christ on that same day, and would soon receive the instructions for his life assignment.

“As I always tell people before, I never really cared for the homeless. When I was going to school, I used to make them do stupid things like do push-ups for a dollar. It was never like some persons who said this is my childhood passion to always help the homeless.

[x_pullquote type=”left”]“When I became a Christian, I said ‘I’ll accept Christ; then I received the full instruction [from God] of ‘I want you to deal with homeless persons. I want you to go and start to work with this vulnerable population of persons’,” Kemar explained.[/x_pullquote]

“When I became a Christian, I said ‘I’ll accept Christ; then I received the full instruction [from God] of ‘I want you to deal with homeless persons. I want you to go and start to work with this vulnerable population of persons’,” Kemar explained.

At that point, Kemar was somewhat reluctant to undertake the mission, after co-founding another organisation with Chief Executive Officer of Supreme Counselling for Personal Development, Shawn Clarke, and moving into an office only seven days prior.

But, as the BVHS president clearly recalled, God sounded his voice once again and declared: “I want you to give up everything to come over here”.

Powerless against such a decree, Kemar stated that he obediently went in the suggested direction, even though he did not feel a “strong passion” for the work immediately.

“I started to speak to the guys on the streets and then they started to move into the different houses with me, as I was the first house manager. I lived with them for like a year and it really opened my eyes to what these guys go through on the streets,” he reflected.

With his new-found wisdom and vision for the vagrants’ rehabilitation, Kemar went on to form the Barbados Vagrants and Homeless Society, which was registered on October 19, 2009, and launched officially in February 2010. 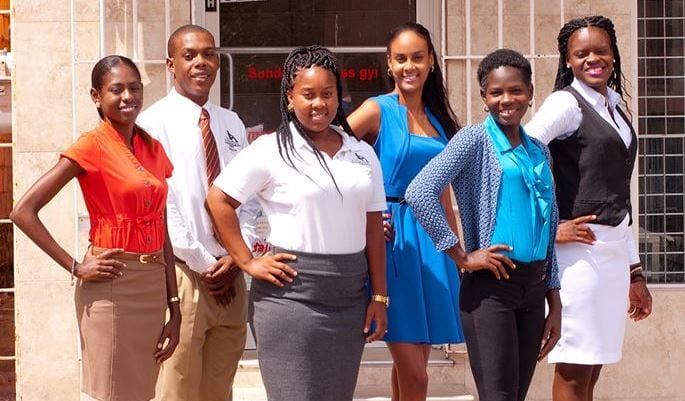 President and Founder of the Barbados Vagrants (BVHS) and Homeless Society Kemar Saffrey (second left), poses for a photograph with present and past staff members of the organisation. (GP)

Initially, the young president revealed that the organisation was met with its share of challenges, particularly from older members of society. Nonetheless, the BVHS continued to grow from strength to strength and is now known locally, regionally and internationally.

According to Kemar, this was partly due to the media which was “always eager to see what’s next for the homeless”, and the organisation’s focus on rehabilitation programmes.

“Homeless shelters were never used for rehabilitation, they were used for overnighting. Rehabilitation came from homes and we said okay, let’s get a home like what myself would live in or you would live in, and start to rehab them from the home…

“This meant living with a house manager; teaching them what it meant to be in a house; teaching them the house rules; giving them counselling; the mentorship; the church educational programmes; recreational tours and a number of activities,” he pointed out.

Adding that the BVHS team started to “work backwards” and focus on what each individual had before they became homeless, Kemar said that this strategy started to spark success.

On November 1, 2012, Kemar was announced as one of the four winners of the Commonwealth Youth Award for Excellence in Development Work, after being nominated by former Executive Director of the Barbados Youth Business Trust, Marcia Brandon.

The award, which remains one of his most prestigious accolades, enabled the young leader to attend a formal presentation ceremony at Buckingham Palace in London; and receive personal congratulations from Her Majesty Queen Elizabeth II.

Apart from the success he has garnered today through God’s grace, Kemar was poised to receive further favour in the form of his confidante and wife, Andrea.

Kemar welcomed his first child, Naaham Saffrey, on January 11, 2016, and has fully embraced his new role as a father. Having only met his father around age 25 and forging an ongoing relationship, he says it is imperative that he is always there for his son.

“Fatherhood is good. I really enjoy it… As soon as I get home he sleeps, and I know I have to get home by a certain time or he’s not going to sleep. He’s still tender and we still have a lot of bonding to do. You really feel the fatherhood now more so than ever,” the BHVS president expressed warmly. The 28-year old also ensures that his step-daughter Avornique is treated equally, and stressed the importance of spending quality time with both children.

In a moment of quiet reflection, Kemar described his walk with God as a very “prophetic” one and stated that he’s “seen God work some serious works in his life”.