She is affectionately called Barbados’ ‘Queen of Gospel’, but unknown to many, Sister Magrita Marshall has experienced a life marked by struggle and hardship.

This may also come as a surprise as one of her many philosophies in life is ‘in everything there will be negatives and positives’, and she chooses to focus solely on the latter.

The now 77-year-old gospel singer remembers all too well an incident from her childhood, which occurred a few years after her mother’s death. It is one she will always recall as “a terrible struggle”.

“My father took me away from school when I was around 11 years old; he took me at my aunt through a stepmother… he never looked back and my aunt sent me out to work between 11 and 12 years old,” she recounted.

Nonetheless, Sister Marshall admits she “had her way” as a teenager, which she does not regret as it taught her “a lot of things”. However, this all changed when she found herself pregnant and alone at the age of 16.

“I wanted to kill myself. The devil told me ‘kill yuhself’, but God wouldn’t let it be so,” she said, adding that her employer at the time, Ms. Philips, decided to take her in and take care of her as best she could.

But in the words of Sister Marshall herself, “behind every dark cloud there is a silver lining”, which in this case was a personal call from God to give her life to Jesus Christ.

“When the call came I was washing wares and I began to cry, and I don’t understand why I was crying. Nobody didn’t trouble me, but I just went on crying, then to realise that a change had come over me. Nobody was there to tell me ‘serve God’ or ‘why you don’t serve God?’ The call just came and I felt a complete inner change,” she explained.

At the age of 20, she made the decision to give her life to Christ and “has not looked back since”. During her early days as a member of the Redmond Village New Testament Church, where she was baptised, she began singing gospel music, which she continues to this day.

“My start in gospel music came in 1959. When the Lord called me, I began to learn the songs of the sanctuary because before that I was a sinner saved by Grace.”

From that moment, she could always be found singing, whether in the church; in the Fairchild Street Bus Terminal, which she frequented; or during the many open air church services she attended with her now-deceased husband, Frederick Marshall.

It was in 1972, after one of her many performances, that she met fellow gospel artiste, the late Joseph Niles. He invited her to perform with him at a concert in St. Thomas, beginning a decade-long relationship with him and his group, The Consolers.

“In those days when I was in the group with The Consolers I was singing solos, but then it increased over the years. I used to help with backups, because he found out I could vary…and we got along very well, because singing is something that I love,” she stated. It was a love, she added, that she inherited from her mother, who equally enjoyed singing.

Her fruitful relationship with The Consolers continued for several years, and the mother of eight had the opportunity to travel to several islands across the region, until her maternal duties took priority.

Two successful albums later, The Consolers dissolved in the late 1970’s. However, this was not the last of Sister Magrita Marshall, as the year 1980 saw the birth of her own band, Sister Marshall and the Victory Voices. 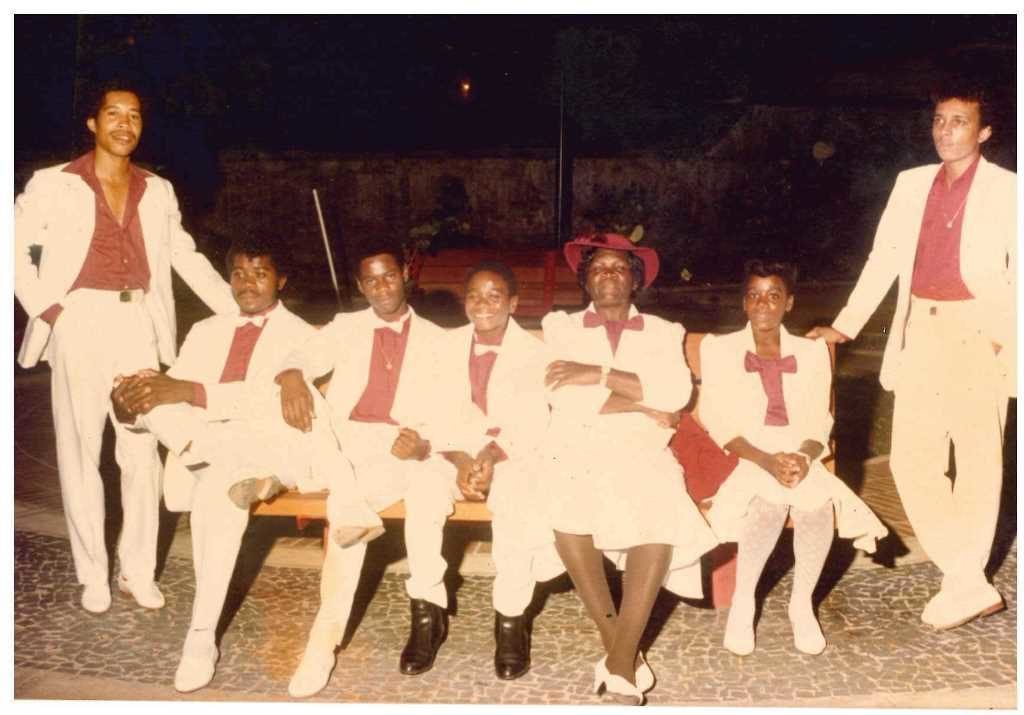 For 10 years, she travelled the region with her band, visiting St. Lucia, Trinidad, the United States and Canada, among other countries. But of all the places she has performed, one island will forever hold a special place in her heart.

The Walk Holy singer recalled a performance in Georgetown, St. Vincent, which had a lasting effect on the life of a then five-year-old boy. She explained that a few months ago, a man she did not know approached her, stating that he recalled a memory from his childhood of one of her many performances, in which he “danced and danced and he felt something within him”.

Sister Marshall continued: “He told me what took place and I could not believe it. He said ‘I am a Christian because when I was a little boy you came to Georgetown and you sang’.”

When she is not on stage spreading the word of her Lord and Saviour Jesus Christ through song, or penning her own gospel tunes, she can be seen helping shoppers in the Warrens area beat the heat with her sno-cones.

She was introduced to the business by her husband in 1976, and quickly learned the art of serving the shaved ice treat. “I could see you doing something and I could watch you and quick so I got it,” she noted.

She stated that she would often use the opportunity of selling sno-cones to interact with persons and spread the gospel, adding that she was regularly asked to pray.

But Sister Marshall enjoys doing so. For her, serving the Lord is an around-the-clock job simply because she believes it is “the best thing anyone can do”. She has therefore built the foundation on which she chooses to live her life around this belief.

Along with showing love, even to persons who may dislike her, she is a firm believer of following in God’s footsteps and doing what she feels is right. “Whatever God calls you to do you must do, so I will continue to sing, as long as I can and as long as God wants me to.”