‘We Barbados’ Procession From Oval To Bridgetown 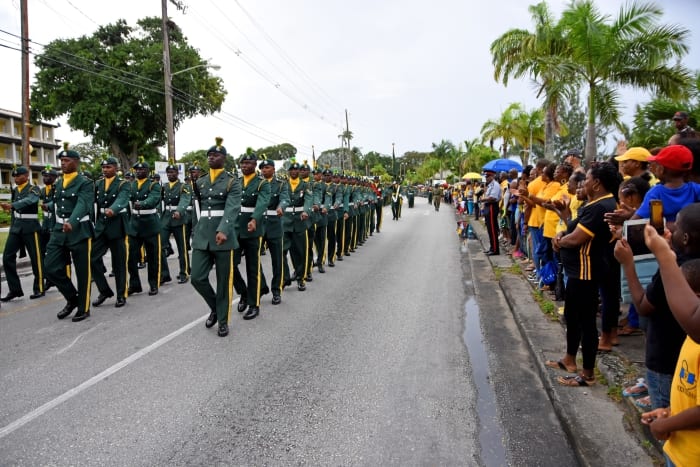 Barbadians and visitors alike are expected to seek every vantage point to witness the skills and showmanship of the armed and unarmed units on Independence Day, Friday, November 30.

In addition, following the 8:00 a.m. Ceremonial Parade at Kensington Oval, the detachments will join the ‘We Barbados’ procession through Bridgetown.

The Girl Guides Association, which is celebrating its 100th anniversary, will lead the march-off through the City, followed by the Mounted Troop, the armed and unarmed units, and a procession including parish and cultural ambassadors, sports groups, and national sporting teams, among others.

A salute will be accorded to Prime Minister Mia Amor Mottley at the Cenotaph War Memorial at National Heroes Square, following which the armed detachments will continue across the Charles Duncan O’Neal Bridge; proceed along Probyn Street; turn right on to Lower Bay Street and then right on to Independence Square for dismissal.

The unarmed detachments will also pay the appropriate compliments to the Prime Minister and turn right on to Charles Duncan O’Neal Bridge for dismissal in front of the Barbados Fire Service Headquarters on Probyn Street.

The We Barbados cultural activity will dismiss in the area in front of the southern side of Queen’s Park and the Queen Elizabeth Hospital playing field.