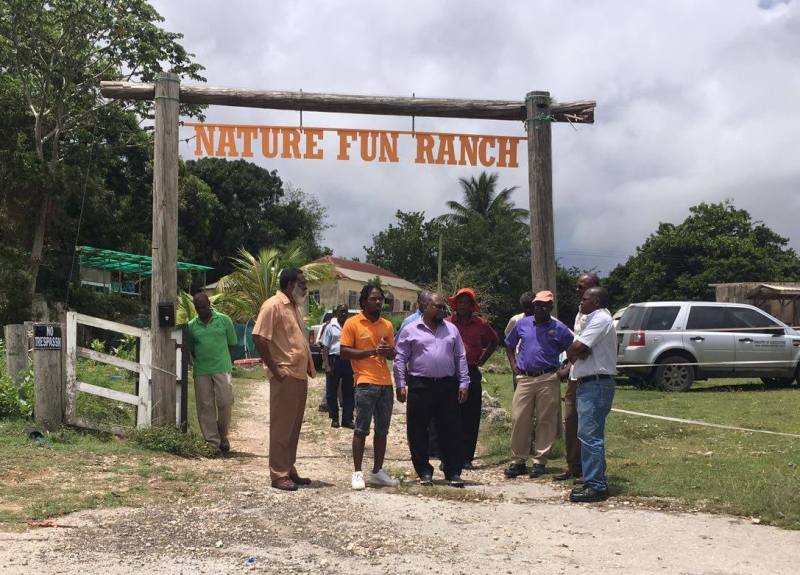 Minister of Agriculture and Food Security, Indar Weir, has given his Ministry’s commitment to ensuring the Nature Fun Ranch (NFR) transitions into “a really good national project for the young people of Barbados”.

His comments came on Wednesday following a tour of the ranch, located at Bruce Vale, St. Andrew. During the tour, which was led by Deputy Ranch Chief Anderson Gill, Mr. Weir received first-hand knowledge of the operations of the facility.

Mr. Weir said he was “excited and inspired” by the facility’s work and believed it could be utilised by Government to develop the skills of troubled youth in agriculture, especially the technological and innovative aspects, as opposed to them being sent to the Government Industrial School.

“A lot of work has to be done here; it is patently obvious that this project needs a lot of support, technical support,” he stated, adding that technical assistance would be given to transform the NFR through the Ministry’s Scotland and Greenland Agricultural Stations.

On discovering that the NFR was self-sustaining in terms of feeding those in attendance, as well as their families, the Agriculture Minister said that such a project could be the basis for the Ministry’s effort towards the ‘Zero Hunger’ goal of 2030 set by the Parliamentary Front Against Hunger under the concept ‘Family Farming’.

Another area of concern to the Minister was the continuous dog attacks on agricultural livestock.  He issued a stern warning to dog owners, stating: “Your dog is your responsibility. We in Barbados have to become a more responsible nation … it cannot continue and we are going do whatever it takes to hold the owners responsible.”

Chief Agricultural Officer, Lennox Chandler, gave the assurance that assistance would be rendered to the Nature Fun Ranch in terms of technical advice, as well as in technical assistance in preparing land cultivation and clearing bush. “We are quite willing and able to help rectify some technical challenges we noted and will design a training programme specifically for them,” he promised.

Mr. Chandler also advised the NFR to not only focus on traditional crops but try their hands at nontraditional crops such as kohlrabi so that they could attract a specific market at a higher price.

The Nature Fun Ranch has been in operation for 20 years but has only been at its present location, which is a part of the Scotland District known for land slippage and soil erosion, for six years. As a result, the Ministry of Agriculture and Food Security will attach an extension officer specifically to the NFR to advise on farming successfully in such an erosion-prone area.