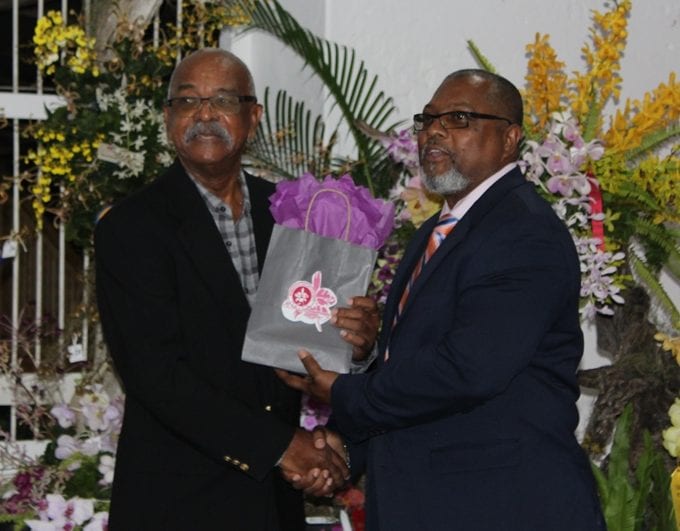 The Barbados Orchid Society (BOS) has been lauded by Minister of Agriculture and Food Security, Indar Weir, for its contribution to floriculture in Barbados throughout its 80 years of existence.

Addressing the BOS’ Gala and Presentation of Trophies to mark its 80th anniversary, held at Balls Plantation, Christ Church, last Friday evening, he noted that the organization had transformed from a small group of avid orchid enthusiasts (formerly the Barbados Orchid Circle), into one of regional and international acclaim.

Recent accolades include winning the First Prize and Show Trophy at the World Orchid Show in 2017, and the Award for Meritorious Arrangement at the Diamond Jubilee Show in Trinidad in 2017.

Noting this augured well for Barbados on the global floriculture stage, Minister Weir further encouraged the Barbados Orchid Society to “maintain its high standards in the pursuit of new and viable market opportunities, and to continually keep marketing Barbados as an island with excellent orchid growing potential”.

Minister Weir also highlighted his ministry’s efforts to aid in the development of the local floriculture industry, through its Cut Flower and Foliage Programme, managed by the Home Agricultural Station.

He disclosed that research had been conducted at the Bullens Agricultural Station and the Plant Tissue Culture Laboratory.  However, the minister stated that while the ministry “had undertaken some research to improve the genetic characteristics of the orchid through crossing and selection, this activity has been recently halted”.

“Consequently, within the last three weeks approximately, 1,000 orchids have been transferred to the Soil Conservation Unit for sale.  I understand that sale of these plants, which are mainly dendrobiums, is going quite well,” Minister Weir added.

The Barbados Orchid Society’s efforts were further acknowledged by judge of the accredited American Orchid Society and chief judge at the BOS’ anniversary show, Robert Fuchs, who said he was impressed by the quality of their flowers over the years.