When A Good Friend Becomes An Enemy

As the Crop Over finale approaches, a local psychiatrist has warned of the serious risks posed to physical and mental health by alcohol abuse.

In Barbados, she notes, the rum shop is almost a cornerstone of many communities and since alcohol is legal, the only major restriction on consumption is good judgement.

“How can this good friend become an enemy? Well, like most friends, if we abuse them, the relationship tends to change for the worse,” she maintained.

Dr. Brathwaite Drummond spoke recently to Crop Over stakeholders at a workshop, organised by the National Chronic Non-communicable Diseases Commission in association with the Ministry of Health. The aim was to sensitise the public, and particularly those involved in Crop Over, to the importance of drinking responsibly while having fun.

The psychiatrist warned that the greater the amount of alcohol consumed, the greater the toll. This ranged from mild impairment in memory, speech and coordination, to more serious impairment, such as increased risk of aggression and the impaired ability to drive. Signs of severe impairment include obvious intoxication, vomiting and alcohol poisoning, while life-threatening signs were identified as stupor and coma.

The medical practitioner explained: “Drinking too much can weaken your immune system, making your body a much easier target for disease. Chronic drinkers are more liable to contract diseases like pneumonia and tuberculosis, and drinking a lot on a single occasion slows your body’s ability to ward off infections, even up to 24 hours after getting drunk.” 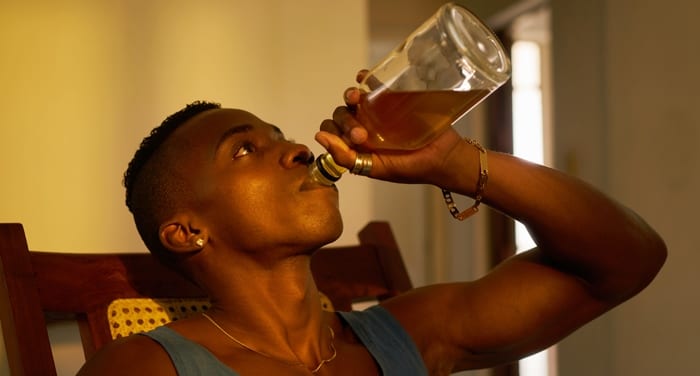 The medical doctor pointed out that “the stereotypical alcoholic passed out on the street corner” represented the minority of persons with alcohol use disorders.

“The truth is, a lot of persons with severe alcohol use problems do not ever appear drunk. They function quite well, sometimes at high levels, and while people around them may know that they drink, they would be shocked to know that an alcohol addiction is present.”

[x_pullquote cite=”Consultant Psychiatrist, Dr. Jo-Anne Brathwaite Drummond” type=”left”]“A lot of persons with severe alcohol use problems do not ever appear drunk. They function quite well, sometimes at high levels, and while people around them may know that they drink, they would be shocked to know that an alcohol addiction is present.”[/x_pullquote]

How do you recognise alcohol addiction? Signs include craving alcohol; continuing alcohol use despite health problems caused or worsened by it; worrying about stopping or consistently failed efforts to control one’s use; and giving up or reducing activities because of alcohol use.

Other important signs are repeated use of alcohol in a dangerous situation such as operating heavy machinery or driving a car; continuing use despite the negative effects on relationships; and experiencing withdrawal symptoms after stopping use.

In respect of alcohol’s effect on mental health, the psychiatrist said it was a depressant drug which slowed body systems, in particular the nervous system, producing drowsiness and decreased neuronal activity. Other alcohol-related disorders include psychosis, anxiety and mood changes.

And for those who believe that a good way to sober up after a binge is to drink coffee, Dr. Brathwaite Drummond reported that far from helping, drinking coffee could put you at greater risk.

“When alcohol is mixed with caffeine, the caffeine can mask the depressant effects, making drinkers feel more alert. As a result, they may drink more alcohol and become more impaired, increasing the risk of alcohol-attributable harm.”

She explained that caffeine had no effect on the metabolism of alcohol by the liver and therefore did not reduce breath or blood alcohol concentrations or reduce impairment.

Additionally, drinkers who mix alcohol with energy drinks are four times more likely to binge drink at high intensity, she said, and are also more likely to engage in dangerous activities such as unwanted or unprotected sex, driving drunk or sustaining alcohol-related injuries.

She also warned of the dangers of mixing alcohol with illegal drugs such as marijuana and cocaine, explaining that intoxication was compounded when drugs were used in combination, and risky practices such as unsafe sex were more likely.

Dr. Brathwaite Drummond had a special caution for young people, who she said were more vulnerable to negative outcomes than adults.

“Alcohol can cause short and long-term harm to developing brains and bodies. Adolescents need only drink half as much to suffer the same negative effects and are at increased risk of social problems, depression, suicidal thoughts and violence.”

Alcohol is the most commonly abused substance worldwide and results in 3.3 million deaths every year, which, as Dr. Brathwaite Drummond points out, are all preventable.

“Have fun but please drink responsibly this Crop Over and every day,” she pleaded.