WHO Suggests A Multi-Sectorial Approach 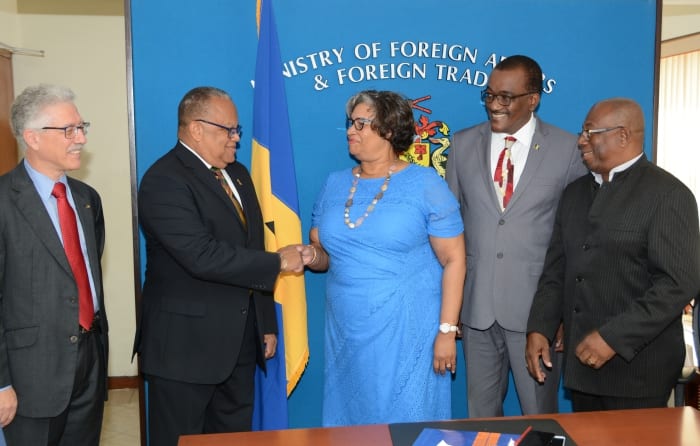 Assistant Director General of the World Health Organization (WHO), Dr. Joy St. John, has urged Barbados to take a multi-sectorial approach to climate change, health and other environmental issues.

She made these recommendations recently during a joint-ministerial courtesy call on Minister of Foreign Affairs and Foreign Trade, Dr. Jerome Walcott. He was joined by Minister of Health and Wellness, Lt. Colonel Jeffrey Bostic; Minister of Environment and National Beautification, Trevor Prescod; and other government officials.

Dr. St. John explained that a multi-sectorial approach was critical in assisting Barbados to assume a leadership role in the areas of climate change, health and environment.

She noted that this approach was beneficial, especially when seeking to access funding, suggesting that in the same way there was a clear national agenda for HIV and a multi-sectorial approach to Non Communicable Diseases, there needed to be similar collaboration for climate change, water sustainability, hygiene in health facilities and air pollution, among others.

The Assistant Director General also pointed out that climate change was a part of the Blue Economy and Barbados needed to ensure there was suitable representation when new policies were created at the international level.

Dr. Walcott thanked Dr. St. John for her advice, and stated that he was conscious of the value of an integrated approach, especially with health, the Blue Economy and the environment. He concluded that he would take her suggestions on board.