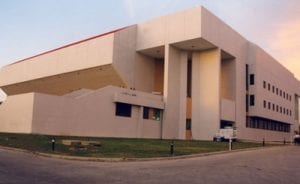 After months of renovations, the Wildey Gymnasium has officially been handed over to Barbados.

During an official ceremony which was recently held at the gymnasium to mark the end of the major renovations, General Manager Assistant in the Chinese Shanxi Construction Engineering Group, Mr. Zhang Shen presented Minister of Culture, Sports and Youth, Stephen Lashley, with a Ceremonial Handover Key.

While speaking to those gathered at the ceremony, Mr. Lashley noted that the project, which had a late start as a result of unforeseen challenges, was still completed on time due to the hard work of the Chinese team.

“Against the odds, the Chinese team led by their respective managers, worked feverishly to ensure the completion of this facility in time for our just concluded and highly successfully CARIFESTA XIII,” he said.

The project, which occurred over the course of 11 months costed $19 million BDS and was entirely funded by the People’s Republic of China. Additionally, the Minister highlighted that all materials and supplies were locally sourced while provision was also made to employ six student interns from the Samuel Jackman Prescod Polytechnic.

Adding that the Government and people of Barbados were eternally grateful to the team of workers from the Shanxi Construction Engineering Group, Minister Lashley expressed gratitude as he spoke of the mammoth task of refurbishing the building.  He expressed the belief that such a project revealed the strong bilateral connections that existed between the two countries.

“This exercise has certainly demonstrated the great friendships that exist between Barbados and the People’s Republic of China. It is a bilateral relationship that continues to bear much fruit. It is our hope that it continues to grow and that many mutual benefits may be derived from it.”

According to the Sports Minister, upon completion of all construction work,  a plaque with the names of all workers will be unveiled as part of the legacy of the project as well as a memorial to the commitment of the team.

Patrons to the newly renovated gymnasium will enjoy a new state of the art sports floor and a full upgrade of electrical, engineering and technological systems among other improvements.