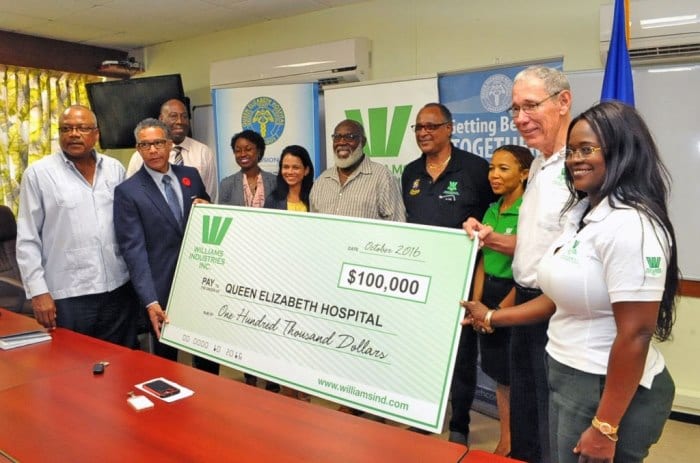 Chairman of Williams Industries Inc., Ralph “Bizzy” Williams (second from right) and his wife, Shelly (right) presenting the cheque to head of the Ophthalmology Department at the QEH, Dr. Trevor Drakes (second from left). Witnessing the presentation were Minister of Health John Boyce (left), the QEH’s CEO, Dr. Dexter James (background left) and other representatives of the QEH and Williams Industries Inc. (A.Miller/BGIS)

The Ophthalmology Department of the Queen Elizabeth Hospital (QEH) today received a $100,000 donation from Williams Industries Inc., which will go towards the purchase of capital equipment for the department.

Mr. Boyce explained that this theme was selected to focus attention on the completion of the third floor of the Lion’s Eye Care Caribbean Centre. Works will involve the re-commissioning of three operating rooms and three recovery rooms.

He said that the estimated cost of the fully-equipped theatres was BDS$2.5 million, and they will be outfitted with surgical tables, lamps, microscopes and equipment to manage patients with cataract, glaucoma and other small incision procedures.

Noting that much of the eye care today was done on an outpatient basis, he said that these technologies would further reduce lengths of hospital stay and, ultimately, hospital costs.

The Health Minister disclosed that the builder’s work for the project would be undertaken by the in-house engineering department at a cost of BDS$1 million.

“The vision is to develop services to meet all the needs of the resident population and leverage capacity to attract patients from outside Barbados. Medical tourism must become a more entrenched reality as overseas patients can obtain high quality procedures par excellence with a one to two-day turnabout,” Mr. Boyce maintained.