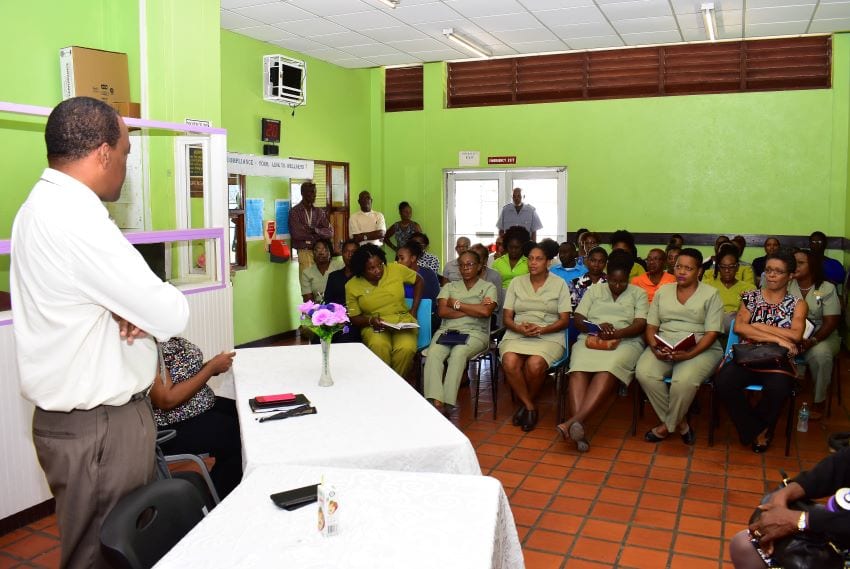 Minister of Health and Wellness, Lt. Col. Jeffrey Bostic, speaking to staff of the Winston Scott Polyclinic today after nurses walked off the job on Wednesday, citing safety concerns. (C.Pitt/BGIS)

The Winston Scott Polyclinic will remain closed for the rest of the week to facilitate an upgrade of safety measures on the compound and industrial cleaning.  It reopens on Monday, March 25.

News of this came from Minister of Health and Wellness, Lt. Col. Jeffrey Bostic, as he met with staff of the facility, after nurses walked off the job on Wednesday, citing safety concerns.

Their action followed two violent incidents at the polyclinic over the last two weeks, the latest occurring on Tuesday night.

He said some measures were already in place, including increasing the number of security cameras from 16 to 28, and improved lighting.  Other steps which will be taken are the installation of electronic access and panic buttons, as well as metal detectors, to ensure that illegal weapons are not brought into the polyclinic.

The Minister disclosed that he was also planning to have discussions with the Royal Barbados Police Force and Barbados Defence Force tomorrow to look at all of the issues, and to identify some of the steps to be taken.  One proposal is for random patrols on a daily basis.

Lt. Col. Bostic also warned the public that if the bad behaviour continued, repeat offenders could find themselves being banned from the polyclinic.

He promised to address the issue in detail during his Budget presentation tomorrow.

Meanwhile, patients from the catchment area who need prescriptions filled during the closure are advised that this may be done at the Edgar Cochrane Polyclinic, Wildey, St. Michael.