Women Urged Not To Lower Standards 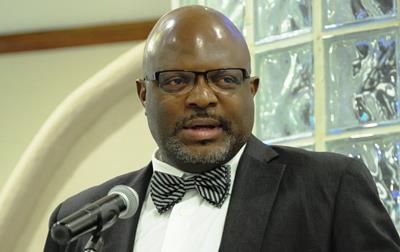 Attorney General, Adriel Brathwaite, has urged Barbadian women not to move away from the values that made them standout, and reminded them that the country needs strong women now more than ever.

Mr. Brathwaite made these comments as he addressed 143 women graduating from the King’s Daughter: Becoming a Woman of Excellence programme, at the Lloyd Erskine Sandiford Centre last Saturday.

The Minister stated that he had seen young women sitting outside shops with beers in hand, taking on the “bad habits” of men and moving away from the ideals that made them standout.

“But, there is no reason for you to lower your standards because it is now the norm,” he told the graduands. Instead, he urged them to maintain their high standards and encourage others to follow their lead.

To do this, the Attorney General encouraged them to pay particular attention to what he termed as two key qualities highlighted during the 12-week programme – self-esteem and their inner beauty. “You can be a graduate from wherever, but if you don’t have self-esteem you would have challenges dealing with them,” he pointed out.

The Minister added that while men appreciated a woman’s physical beauty, their inner beauty, which would include qualities like self-confidence, and the ability to stand alone, was equally important. He also urged the women to keep believing in themselves and demand respect, even from their partners.

Mr. Brathwaite, who is also the Minister of Home Affairs, also praised the programme, which he said had benefited over 900 women, including some from HMP Dodds. He urged organisers to consider introducing the programme to the female residents at the Government Industrial School so that they too could benefit.

During the graduation ceremony, Associate Pastor at the People’s Cathedral, Reverend Jewel Callender, reminded the women that God was aware of whatever challenges they were facing. “Even if you were in a less than ideal situation, believe in God and that He can change your situation,” she said.

See also:
Tags: Adriel Brathwaite, Office of the Attorney General and the Ministry of Home Affairs