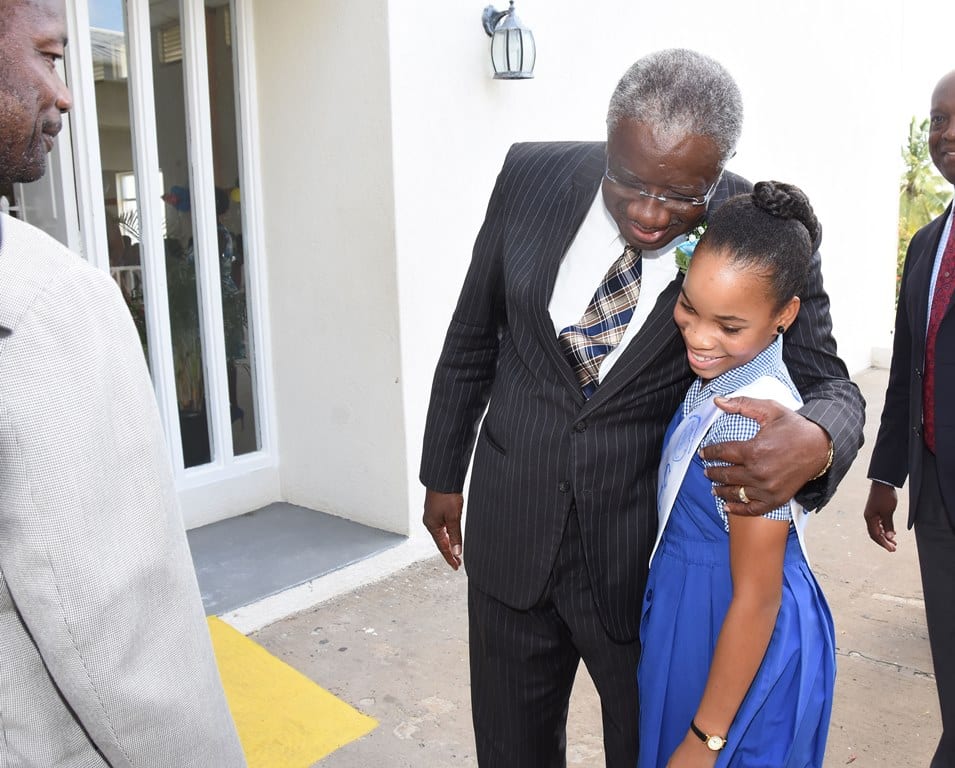 Prime Minister Freundel Stuart hugging one of the graduates of the Reynold Weekes Primary at today’s ceremony while Principal, Anderson Bishop (left) looks on. (C.Pitt/BGIS)

That was part of Prime Minister Freundel Stuart’s message today to the Reynold Weekes Primary School’s Graduation Class of 2016, at the Barbados Workers’ Union Labour College.

Mr. Stuart told the students that there was no room in Barbados for mediocrity or low standards.

“If you are mediocre, you have too much competition around you… If you aim for the top, you don’t have too many people to worry about because very few people aim for up there; so you have all the elbow room you want to be the best that you can be. All of you therefore should aim to be at the top; make up there a little more crowded than it is now.

“As long as you strive for excellence, you are not only good to perform your role in Barbados, you become a citizen of the world because wherever you go in the world, your quality will be in demand, people will want you because you belong to the top layer,” he said.

The Prime Minister urged the students to take full advantage of the opportunities available at their new schools, while stressing that there were no bad secondary schools in Barbados.

“Do not allow anybody to confuse you with the view that if you did not get into the school of your first choice that you have failed. None of you in this graduating class this morning is a failure; all of you have an opportunity to be the best that you can be,” he affirmed.

Mr. Stuart also told the graduates that they were going to have some choices to make, and exhorted them to choose carefully and wisely. He added that they would also have to be careful about what they consumed through their eyes and ears, saying it could have a lasting effect on them.

He urged the parents to be vigilant and to keep a careful watch on what their children were doing. He called on them to steer the children’s gaze away from “short cuts”.

The Prime Minister commended the school for its many achievements over the past year, saying that the late Reynold Weekes would have been proud.