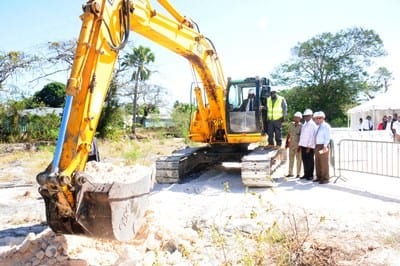 Officials breaking ground at the site for the construction of the new Hastings/Worthings Police Station in January. (FP)

Ongoing construction work on four police stations under the five-year $76 million Citizen Security Facilities Project is on time and within budget.

Attorney General, Adriel Brathwaite, gave this assessment yesterday following a tour of the new Hastings/Worthing Police Station at Hastings, Christ Church; the new police station and magistrate’s court at Cane Garden, St. Thomas; the refurbishment of the old male barracks at the Central Police Station in Coleridge Street, The City; and the renovation of the former Black Rock Police Station to house the Truth Verification and Family Conflict Units.

He was accompanied by Permanent Secretary in the Office of the Attorney General, Diane Campbell; Project Consultant in the Ministry, Captain Andrew Headley; senior representatives of the Royal Barbados Police Force (RBPF); other Ministry officials, and the media.

Noting that he was “generally happy” with what he had seen and the progress made so far, and cost wise, Mr. Brathwaite said everything appeared to be on stream. “We were given a budget and were told that we would not be receiving any more money other than the $76 million which was the cost of the project. We have to be cognisant that we stay within those lines,” he emphasised.

Stating that he would continue to follow the progress of the projects, the Attorney General said he was also looking forward to the opening of the Family Conflict Unit and the Truth Verification Unit at the former Black Rock Police Station later this year. “We are doing some child-friendly things inside the building,” he explained, while adding it was also being outfitted to accommodate the disabled.

However, he noted that the ongoing projects would not solve the space challenges in the RBPF. “We still have challenges with the location of the CID [Criminal Investigations Department]. We are still trying to get them into one space, [and] we still have plans on doing a headquarters for the management and high command in Wildey, St. Michael,” Mr. Brathwaite said, noting there were also plans to find a home for the Force’s Marine Unit.

Meanwhile, Mr. Headley explained that the $13 million Cane Garden, St. Thomas, project would see a civic centre comprising a new police station occupying 11,000 square feet of land, while the magistrate’s court will account for 6,000 square feet of land space. He added that the existing structure at the old Black Rock Police Station would be maintained where possible, while additional work would be done on the outside.

Captain Headley further noted that at the old male barracks at the Central Police Station, a large gym with changing facilities for males and females would occupy the ground floor, while the first two floors would be used for the rank and file of the Force. He concluded that the site at Hastings, Christ Church, would see the amalgamation of the Hastings and Worthing Police Stations on 23,000 square feet of land, and the closure of the current Worthing Police Station.

During the launch of the project in January, Director of the National Insurance Scheme, Ian Carrington, said his department undertook funding for the project because it recognised the need for police officers to have physical conditions that were conducive to their production levels and ability to protect citizens. He explained then that the money would be repaid out of the rental income over a five- year period.

The project will also see the construction of a new Police Headquarters facility at Wildey, St. Michael; the relocation of the Belleplaine Police Station, post office and the Welfare Office to the Elaine Scantlebury Home in Belleplaine, St. Andrew; the permanent relocation of the Drainage Division and Quantity Surveyors’ Section of the Ministry of Transport and Works to the former Barbados Water Authority Headquarters, Pine, St. Michael; the construction of a new police station and Magistrates’ Court at Boarded Hall, St. George; and the refurbishment of the old Registration Department to house the Criminal Investigations Department.