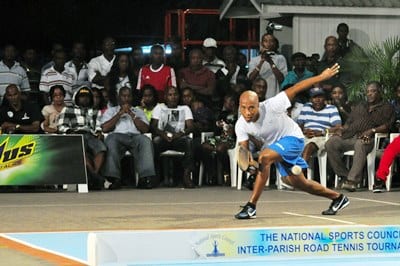 Efforts to make road tennis a global sport are well under way, as preparations continue for the upcoming World Road Tennis Championships.

Minister of Sports, Stephen Lashley, noted this while addressing a press launch of the Championships at his Ministry’s headquarters in Sky Mall.

Mr. Lashley, whose Ministry has been lobbying for the exportation of Barbados’ most popular indigenous sport, said that the tournament would be “extremely prestigious”, and provided the island with the opportunity to “send a message to the rest of the world that we are very proud of this our indigenous sport”.

Under the theme: Road Tennis for All, the tournament will run from Wednesday, November 9, to Sunday, November 13, and will be held at the Springer Memorial Secondary School’s auditorium, Government Hill, St. Michael.

Noting the tournament’s focus on inclusion and equality, the Minister disclosed that the top male and female winners would receive the same amount for the cash prizes.

The tournament will also see several regional and one international team compete for various cash prizes of up to BDS $20,000. To date, the confirmed participating countries are Jamaica, Guyana, St. Vincent, St. Lucia and the United States.