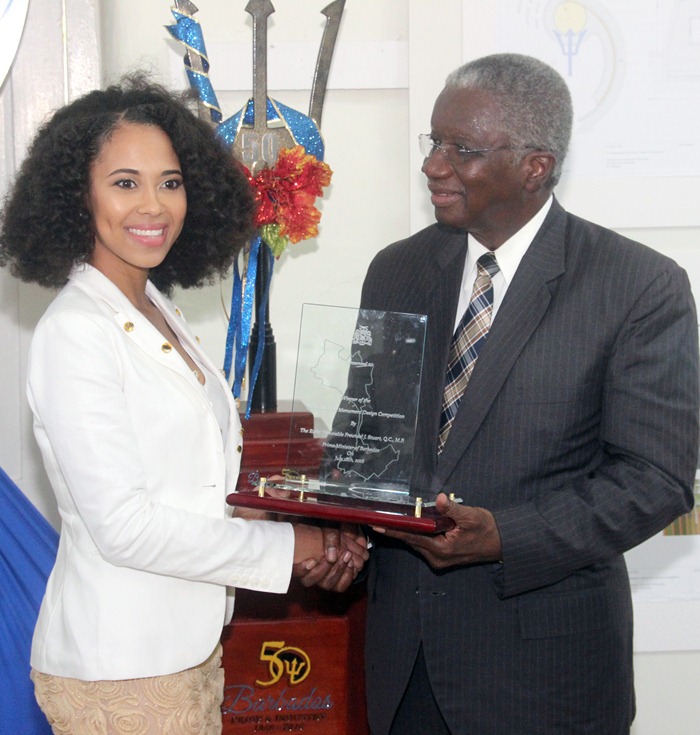 Taisha Carrington accepts her prize from Prime Minister Freundel Stuart, after she was named winner of the Barbados at 50 Monument Design Competition, today at the Main Guard, Garrison. (C.Henry/BGIS)

Twenty-three year old Taisha Carrington, who is a third year student at Pratt Institute in New York, has won the Barbados at 50 Monument Design Competition.

Ms. Carrington today received a trophy along with a cheque for $20,000 from Prime Minister Freundel Stuart during a ceremony at the Main Guard, Garrison. The monument will be installed in time for this island’s 50th anniversary of independence on November 30, this year.

Mr. Stuart has expressed the view that the installation of the monument in the UNESCO Historic Bridgetown and its Garrison World Heritage Site was important and that it would add to Barbados’ heritage tourism product.

He told his audience: “Every time our product is developed, it makes our tourism industry a little stronger, a little more competitive…. So heritage tourism is very much an agenda item on all that we are doing here in Barbados and to have a UNESCO World Heritage Site, and on that site to have planted a Barbados at 50 Monument is bound to be a source of enrichment to our product offerings in the area of heritage tourism.

“So we expect confidently, as we do now, to see visitors being directed to this part of Barbados to be brought up-to-date on all of the history that surrounds this very important area; a very important part of that history being the fact the Union Jack was lowered here at the Garrison, the Broken Trident was raised and that there is here a monument to Barbados at 50, memorialising that important reality.”

Mr. Stuart stressed that Historic Bridgetown and its Garrison could not be frozen in time. According to him, there ae things that must be done to keep the area current, while at the same time ensuring that none of its “pristine authenticity” is lost.

Forty-eight submissions were received for the competition and the five finalists were: Vincent Jones and Hugh Holder; Kevin Talma and John Burgess; Selwyn Small; Jason Hope and Ms. Carrington.

Ms. Carrington is happy to have won the competition, saying that she wanted to leave a mark on her island.

“This is just the first step in that direction; I plan to make a lot of changes in the face of art in Barbados and the Caribbean.

“It meant so much to have the opportunity to have a place in history like those who wrote our anthem, those who did all of the amazing things that have made our country what it is; it is beyond phenomenal to be able to stand among them and say that I gave Barbados its first national monument,” she stated.

She explained that the monument would capture Barbados’ past, present and future.